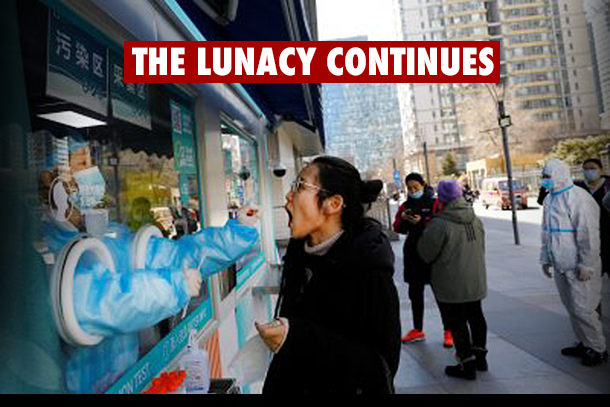 The issue of COVID-19 and how the state should react to pandemics is now seriously shifting in China.

Protests against the communist government’s hysterical Covid-19 mitigation polices are now threatening to destabilise parts of the country, leaving the party in a major conundrum.

Even the once unanimous choir of global health experts are now saying that Beijing’s ‘Zero Covid’ strategy is totally unsustainable.

Moreover, during an interview Tuesday, the head of the International Monetary Fund told The Associated Press that the Chinese government needs to dial down the medical authoritarianism, and make its approach much more “targeted” in order to reduce economic disruption.

“We see the importance of moving away from massive lockdowns,” said IMF Managing Director Kristalina Georgieva in Berlin. “So that targeting allows to contain the spread of COVID without significant economic costs.”

As a result, China may now have to abandon its over-the-top, non-scientific Covid elimination policy and move towards prompting treatments for the alleged illness. Events have prodded China to speed up the schedule for a shift of Covid focus to treatment rather than prevention, according to sources close to the State Council leadership.

The sources have reaffirmed to Asia Times that decisions reached just prior to the 20th Congress of the Communist Party of China to relax Covid controls have not changed. Indeed, preparations for the change have been underway since early October, they say – but now, with omicron cases surging and protests threatening to get out of hand, the matter has become more urgent.

According to the sources, further relaxation is now scheduled to start in the course of January when Beijing will formally announce the end of the pandemic and classify Covid as an endemic infectious disease. That’s earlier than previously planned.

Health officials and their direct superiors who have been promoting heightened control measures to prevent death of the elderly have been overruled. Local government officials who are deemed to have promoted measures deemed excessive – not in line with the 20 new guidelines for easing Covid Zero that were issued November 11 – will be reprimanded, according to the sources.

The Anbound Research Center gave no details of possible changes but said President Xi Jinping’s government needs to focus on shoring up sinking growth. It noted the United States, Europe and Japan are recovering economically after easing anti-disease curbs.

“Preventing the risk of economic stall should be the priority task,” the think tank said in a report titled, “It’s Time for China to Adjust Its Virus Control and Prevention Policies.”

The Chinese Communist Party’s “Zero COVID” policy is draconian, unscientific, and represents a gross violation of individual rights. The Chinese people are right to protest the maniacal impulse to exercise total control of the population which is the hallmark of the CCP regime. pic.twitter.com/pTMzG92u0U

Is there really an end in sight from this madness?

U.S. Has Highest Rates of Infant and Maternal Deaths with Lowest Life Expectancy while Spending More on Medical Care than Other Affluent Countries

U.S. Has Highest Rates of Infant and Maternal Deaths with Lowest Life Expectancy while Spending More on Medical Care than Other Affluent Countries