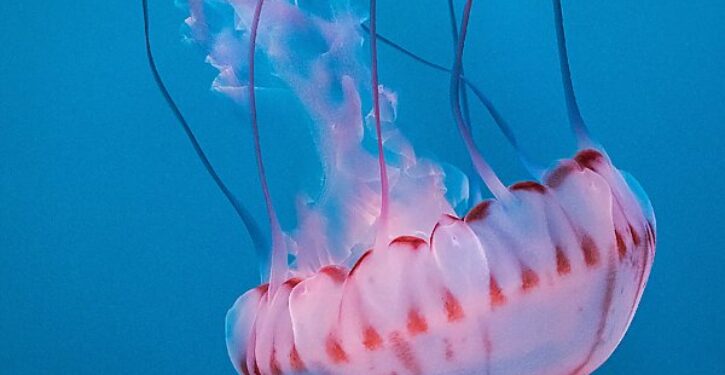 Powerful jellyfish are moving closer to America’s northeast coast. For example, thousands of mauve stinger jellyfish, which inflict a painful sting, were seen on the coast of Long Island this Labor Day weekend, even though they are usually found off the coast of Mediterranean beaches, not the the U.S.

About 200 beachgoers at Robert Moses State Park and 30 at Jones Beach State Park received first aid to treat their stings from these purple jellyfish on Sunday alone, according to George Gorman, regional director for New York state parks in Long Island.

“We literally had thousands along the shoreline here at Robert Moses State Park,” said Gorman. “They were right here so the people were interacting with them and they got stung.”

The mauve stinger jellyfish are bioluminescent and thus are sometimes referred to as purple-striped jellies.  Most left the Long Island coast late Sunday, and drifted further out to sea by Labor Day.

Paul Bologna, director of the marine biology and coastal sciences program at Montclair State University in Montclair, New Jersey, said mauve stingers are native to the north Atlantic, but typically stay in deep water far from shore. They are more often seen in the Mediterranean Sea and the Gulf of Mexico than places like New York, New Jersey, and Connecticut.

It is likely that they rose with an upwelling of water and were brought closer to the Long Island coast by the tides and coastal currents, he said.

“I have found a few isolated [purple-striped jellies] over a decade of working with jellyfish in the mid-Atlantic region,” Bologna said. “This is an extremely rare event.” The more prevalent jellyfish on Long Island are the moon jellyfish the lion’s mane, and the rhacastoma.

The purple-striped jellies also temporarily became very common on the New Jersey coast. Bologna runs the New Jersey Jellyspotters Facebook page, where members in the past week have posted photos of mauve stingers and the painful welts they left on people’s arms and legs. “Here there were just lots and lots of reports of people being stung all over the place,” he said.