Recorded Cases of Heart Disease Among Under 40 Years Old Explodes 20,000% After COVID-19 Vaccines Roll Out 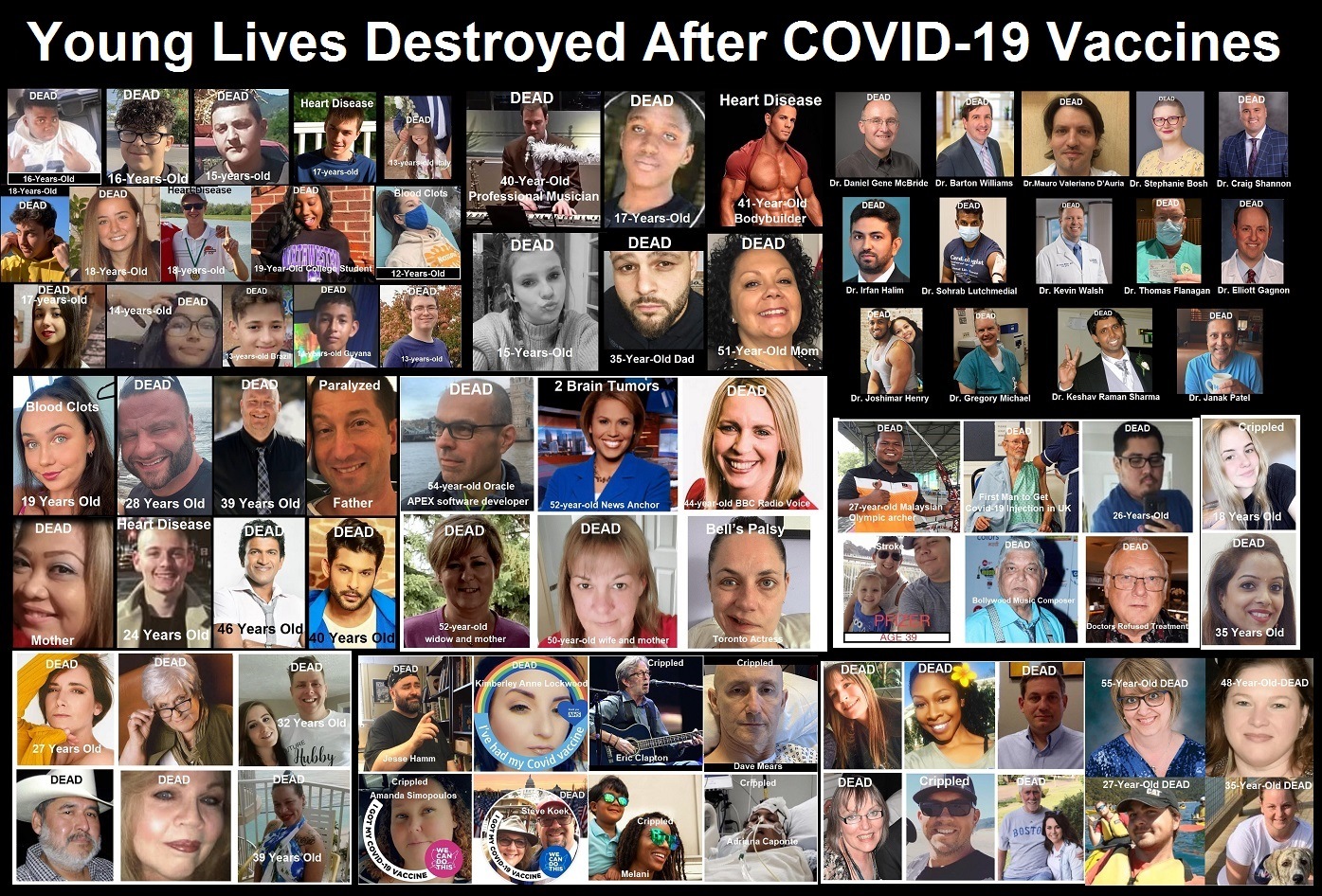 A sample of stories we have covered where people died or suffered crippling injuries after a COVID-19 vaccine.

A new study out of Israel published in the journal Nature reports that there has been a dramatic increase in emergency cardiovascular events among the under-40 population in Israel during the COVID-19 vaccine roll outs.

Using a unique dataset from Israel National Emergency Medical Services (EMS) from 2019 to 2021, the study aims to evaluate the association between the volume of cardiac arrest and acute coronary syndrome EMS calls in the 16–39-year-old population with potential factors including COVID-19 infection and vaccination rates.

Using Negative Binomial regression models, the weekly emergency call counts were significantly associated with the rates of 1st and 2nd vaccine doses administered to this age group but were not with COVID-19 infection rates.

While not establishing causal relationships, the findings raise concerns regarding vaccine-induced undetected severe cardiovascular side-effects and underscore the already established causal relationship between vaccines and myocarditis, a frequent cause of unexpected cardiac arrest in young individuals.

Jennifer Margulis and Joe Wang wrote about this study recently in The Epoch Times:

You would think that the scientific community, public officials, and every media outlet in the world would be discussing a new peer-reviewed article entitled, “Increased emergency cardiovascular events among under 40 population in Israel during vaccine rollout and third COVID19 wave.” Why? Because the results of this study are nothing short of astounding.

The research was co-authored by Drs. Christopher Sun, Ph.D, a postdoctoral fellow with Healthcare System Engineering at Massachusetts Generation Hospital and with the Massachusetts Institute of Technology’s Sloan School of Management; Eli Jaffe, Ph.D., who is affiliated with Israel’s National Emergency Medical Services, and one of Israel’s leading authority in the field of emergency medicine and medical management; and Retsef Levi, Ph.D., the J. Spencer Standish (1945) Professor of Operations Management at the MIT Sloan School of Management.

Their team analyzed data collected by Israel’s National Emergency Medical Services between 2019 and 2021. They found that there was an over 25 percent increase in emergency calls about cardiac arrest and acute coronary syndrome—an umbrella term used for coronary problems associated with sudden-onset reduced blood flow to the heart, according to the Mayo Clinic– for young adults, ages 16 to 39 years old, compared to the same time period in both 2019 and 2020.

Furthermore, the researchers discovered that this increase in emergency heart issues was associated with COVID-19 vaccination but not with COVID-19 infections.

“An increase of over 25% was detected …compared with the years 2019–2020. [T]he weekly emergency call counts were significantly associated with the rates of 1st and 2nd vaccine doses administered to this age group [16 to 39] but were not with COVID‐19 infection rates. While not establishing causal relationships, the findings raise concerns regarding vaccine‐induced undetected severe cardiovascular side‐effects and underscore the already established causal relationship between vaccines and myocarditis, a frequent cause of unexpected cardiac arrest in young individuals.”

As the three scientists themselves point out, this new peer-reviewed science dovetails with a growing body of scientific and clinical evidence that shows myriad side effects—some of which are extremely severe—from COVID-19 vaccines themselves.

The scientific community has started to document the side effects. For instance, in June of 2021 an international team of sixteen scientists published a research letter noting the temporal relationship between the onset of acute myocarditis in eight adult men, between the ages of 21 and 56.

These scientists, writing in the journal Circulation, underscored that “…the real incidence of acute myocarditis after COVID-19 mRNA vaccination … appears to be extremely rare,” given the millions of people who had been vaccinated seemingly without incident. Still, they wrote, “providers should be vigilant for myocarditis after COVID-19 mRNA vaccination, and further research is required to understand the long-term cardiovascular risks.”

That article quoted Dr. Vinay Prasad, a hematologist-oncologist and associate professor in the department of epidemiology and biostatistics at the University of California San Francisco, who expressed deep reservations about giving COVID-19 vaccines to young people, given the early reports of heart damage.

“There is a clear and large safety signal in young men and a clear but small signal in young women as well,” Prasad said. Given the risk of cardiac damage, Prasad said, the safest way forward would be to suspend all vaccination in children under eighteen and give only one vaccine dose to men under 25.

More recently, in February 2022, three scientists (a researcher based in Germany, a physicist also based in Germany, and an independent data and pattern scientist based in the Netherlands) published a letter to the editor in the journal Clinical and Translational Discovery, “The risk-benefit ration of Covid-19 vaccines: Publication policy by reattraction does nothing to improve it.”

This letter also analyzed data from Israel. The data is disturbing. These scientists concluded that “as we vaccinate 100 000 persons, we might save five lives but risk two to four deaths”.

Among other things, they pointed out that the CDC’s own passive reporting system, VAERS, which is now showing several very concerning signals—as of April 22, 2022, 27,532 deaths post-vaccination have been reported, as well as 14,096 heart attacks, and 39,639 cases of myocarditis/pericarditis—is known for underestimating both deaths and adverse effects from vaccines.

Who are the people behind these numbers? The young people who were eager to get vaccinated so they could theoretically be protected against COVID-19 and also theoretically protect others but instead lost their lives or had their health severely compromised as a result of vaccine-induced myocarditis?

Including people up to the age of 40 is a much larger data set, as the original COVID-19 vaccines given emergency use authorization (EUA) in December of 2020 included those aged 16 and above, with 11 to 15 year olds authorized later, and 5 to 11 year olds after that in 2021, while children under the age of 5 have not yet been authorized.

For the 17 months since the COVID-19 vaccines were authorized, young people under the age of 40 have filed 6,711 cases reporting some type of “carditis,” resulting in 36 deaths, 261 permanent disabilities, and 656 life threatening events. (Source.)

By comparison, I ran the exact same search for the previous 30 years before the COVID-19 vaccines were given authorization, and during that time there were 713 cases of carditis reported for those under 40. (Source.)

That’s a 19,832% increase of cases of carditis reported for this age group following COVID-19 vaccines!

If someone like myself can easily pull these statistics out of VAERS to corroborate what the Israeli study was observing, you can be sure our Government health agencies can also. They are committing crimes against humanity by allowing these killer COVID-19 shots to continue, as they lie to the American public.

This past weekend, FDA chief Dr. Robert Califf appeared on CNN and had the nerve to tell the American people that the #1 cause of death in the United States right now is “online misinformation,” like the kind of information I am supplying to the public with this article, using the U.S. Government’s own data.

This man needs to face a federal grand jury on charges of mass murder, convicted, and publicly hung.

During an appearance on CNN, FDA chief Dr. Robert Califf asserted that the leading cause of death in the United States is online “misinformation.”

Califf spoke about his remarks during an interview with CNN’s Pamela Brown, which were originally made at a health conference in Texas last month when he said online misinformation was “now our leading cause of death.”

After admitting that there was “no way to quantify this,” before mentioning heart disease and cancer (actual killers), Califf went on to bolster the claim anyway.

Claiming that there has been “an erosion of life expectancy,” Califf went on to say that Americans were living an average of 5 years shorter than people in other high income countries.

Califf said that anti-virals and vaccinations meant “almost no one in this country should be dying from COVID,” before going on to explain that there was also a “reduction in life expectancy from common diseases like heart disease.”

“But somehow … the reliable, truthful messages are not getting across,” he said, adding, “And it’s being washed down by a lot of misinformation, which is leading people to make bad choices that are unfortunate for their health.”