Remember When Climate Experts & MSM Were Fear-Mongering About The Amazon Being Destroyed By Droughts Caused By CO2? Never Mind 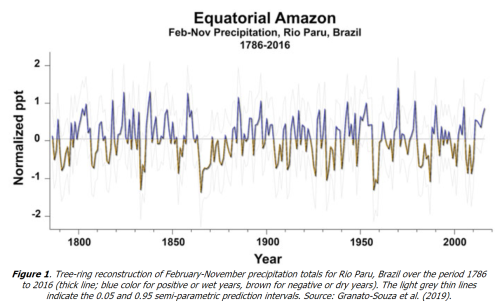 Back around 2005-2010, the climate change experts and the mainstream media were going on and on about the Amazon devastation due to droughts.

The implication was that the droughts were due to human caused climate change, and the droughts, in turn, would cause more climate change that would then cause the droughts to worsen – a prospective positive feedback loop prediction that did not bode good tidings for humans.

But skeptics around the world challenged these conclusions for obvious reasons.

Major regional droughts have always happened and they were not driven by human CO2 emission activity in the form of fossil fuel consumption. Plus, surprise, droughts have this habit of ending, which are then followed by periods of plentiful rain.

As it turns out, the skeptics were right again and the climate experts; and the expert/MSM coalition were again victims of their own failed prediction hubris.

In a recent peer-reviewed study, nine scientists reconstructed the precipitation totals for the eastern equatorial Amazon basin of Brazil.

The adjacent chart depicts their findings. Simply stated, there are periods of excess rainfall and there are subsequent periods of drought over the 230-year period. The dramatic precipitation fluctuations are part of the natural cycle and those droughts taking place in the 21st century are part of this natural pattern.

From a review of the study:

“Examination of the precipitation record reveals, in the words of the authors, that it is “dominated by interannual and subdecadal variability, not unlike the instrumental precipitation totals for the eastern Amazon study area.” Focusing on such variability captured in the reconstruction, Granato-Souza et al. note the existence of two extended wet episodes, a mid-twentieth century period from 1942-1956 and an earlier late nineteenth century period between 1882 and 1903, and one exceptional extended dry episode that occurred during the years 1864 and 1881…..A longer-term perspective of the moisture regime clearly indicates there is no compelling support for that contention given that both wet and dry periods of greater duration and magnitude have naturally occurred throughout the record despite atmospheric CO2 concentrations being much lower than they are today.”

See prior articles on droughts and failed predictions.

Extremely pleased with the print quality of my new Artillery Genius Pro. Big thanks to this subreddit for the wiki advice and printer suggestions!

PREPLANNED! This will NOT end well…