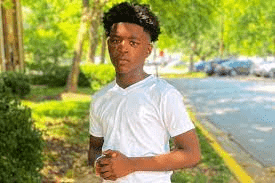 “We recognize the community’s desire to get the details of this incident, but we must also acknowledge that the ongoing nature of the investigation prevents us from sharing specifics that could jeopardize the integrity of this case,” Contee said during the first press conference held since the Saturday morning shooting.

“There’s been too much misinformation swirling around this incident, too many people have made assumptions about this case, and it is unfair to the grieving family,” he added, forcefully. “Spreading of inaccurate information is dangerous, reckless, and has the potential to adversely impact the investigation and the relationships in our community.”

“People are making allegations centered around race, and that is wrong,” Contee said.

A D.C. police report shows officers responded shortly before 4 a.m. Saturday, Jan. 7th, to the call of a juvenile shot by the 1000 block of Quincy St. Northeast. The scene is not far from Brookland Middle School and Turkey Thicket Recreation Center. The 13-year-old shot and killed attended Brookland Middle School.

According to investigators, the unidentified homeowner confronted and shot Blake after claiming that he was breaking into several vehicles along the street. Investigators said, when officers arrived at the scene, they found the homeowner performing CPR on the boy. Blake was taken to an area hospital after the shooting and later pronounced dead.

Chief Contee did not say 911 was called before the shooting. He identified the shooter as the person who notified police.

Before the news conference, FOX 5 spoke with a man who identified himself as the paternal grandfather of 13-year-old Karon Blake. The family is calling for justice and for the shooter to immediately be arrested.

“It’s just sad. It don’t make no sense. Kids – I know kids out here wild’n out. They killing each other, black on black crime, but getting into a car or taking someone out of a person’s car, you don’t deserve to get killed,” said Sean Long, who says he’s better known as “Ritchie Ritch” in the community.

He told FOX 5 to be completely honest, he hadn’t spoken with his grandson in a while. However, the grandfather told FOX 5 that when he did check in with Blake’s mother, he was told he was doing better after having gotten into some trouble. {snip}