Per the ‘consensus’ climate model science – and its faithful apostles – a gigantic CO2 emission plume produced by civilization is supposed to increase global temperatures, especially in the lower atmosphere.

But quite the opposite has happened over the past 7 years and 9 months when some 230 billion CO2 tonnes were expelled from fossil fuel combustion.

More specifically, the global lower troposphere has been in a very slight cooling trend since October 2014; and the atmosphere over the tropics for about a year longer.

Using a combination average of the two primary (RSS and UAH) satellite global measurement datasets, the below plot shows the declining trend in temperatures in contrast to the growth of atmospheric CO2 levels reported by NOAA. (The R2 of the temp anomalies and CO2 ppm levels doesn’t exceed +0.01, indicating that CO2 has had little, if any, influence on recent global warming/cooling.) 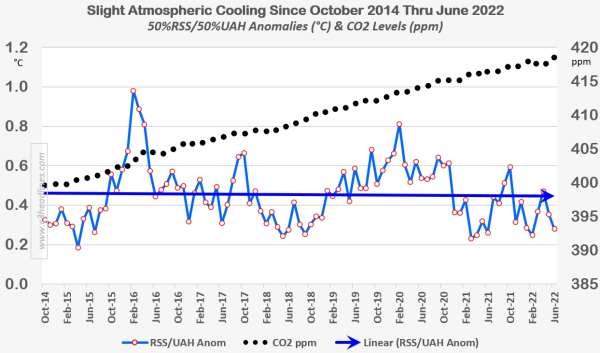 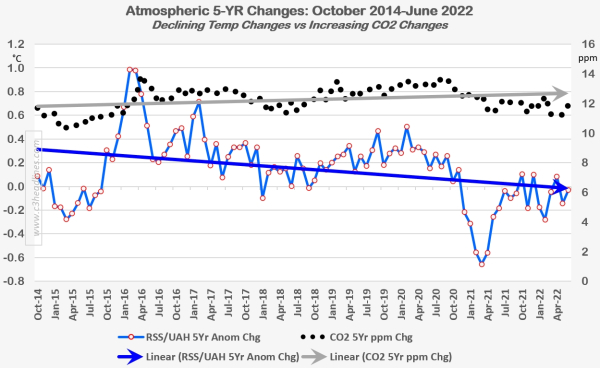 Finally, the next chart plots for both the temperature anomalies and CO2 levels the moving 5-year trends. Essentially, the temperature plot exhibits a trend that continues to decline over the vast majority of months since 2014. And it’s very obvious the moving 5-year CO2 trend over the 7 years, 9 month span is absolutely not driving the temp trend. (The R2 between the two is a measly +0.05.) 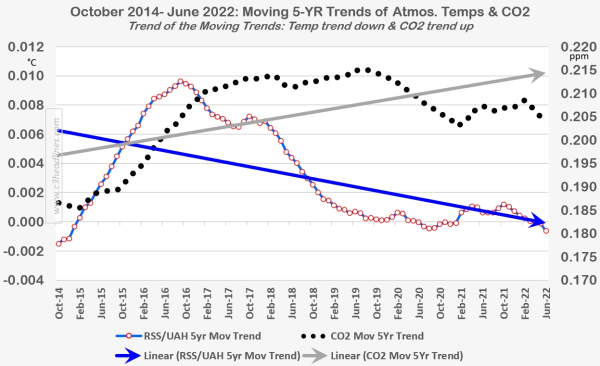 None of the above tells us that the current global cooling will continue. Like anything else with the global climate, this current state has a high likelihood of changing – that’s a given.

But the above does tell us that the globe and civilization are not on some out-of-control freight train headed towards the cliff of an imminent system-wide doomsday meltdown. Not-Going-To-Happen would be a safe bet without one having to cross their fingers.

Conclusion: Politicians/bureaucrats who state there is an imminent existential threat from CO2 induced global warming and climate change are best thought of as flat-out liars, based on the actual scientific climate data.