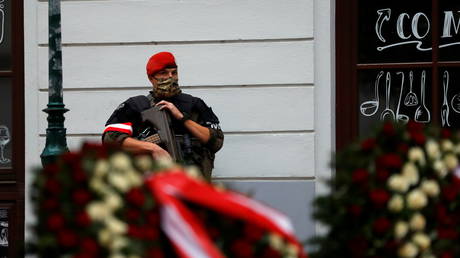 Austria’s interior minister has revealed that Slovakia informed Austria about the Vienna attacker attempting to buy ammunition during the summer, but the information was somehow lost in a breakdown of communications.

Interior Minister Karl Nehammer told reporters on Wednesday that the Austrian authorities had failed to act on information provided by Slovakian intelligence concerning the Vienna gunman.

It had been reported earlier on Wednesday that Slovak intel had tipped off the Austrian authorities that the shooter, who was killed by police during Monday’s attack in Vienna’s city center, travelled to neighboring Slovakia in July and attempted to buy ammunition for a Kalashnikov AK-47. However, he returned to Austria empty-handed from his trip.

He added that the terrorist, who Austrian investigators have identified as Kujtim Fejzulai, had “perfectly deceived” the deradicalization program designed to reintegrate jihadists into society.

Also on rt.com
14 arrested in connection with Vienna terrorist attack as police carry out 18 raids

In response to these failings, Nehammer announced that there would be an independent panel to look into what went wrong and how the Slovak information was lost.

He also added that the investigation into the terrorist attack is “in full swing,” and that evidence gathered from more than 20,000 videos confirms the original theory that there was no second gunman.

Nehammer said that those detained in association with the attack had a similar profile to the gunman, noting that all 14 have “a migration background and partly non-Austrian citizenship.” He added that they were also all aged between 18 and 28 years old.

On Tuesday, Nehammer said that police carried out 18 raids and made 14 arrests following a search of the deceased assailant’s home.

Fejzulai, a convicted Islamic State sympathizer, was sentenced to 22 months in prison in April 2019 after he attempted to travel to Syria. He was granted early release in December 2019.