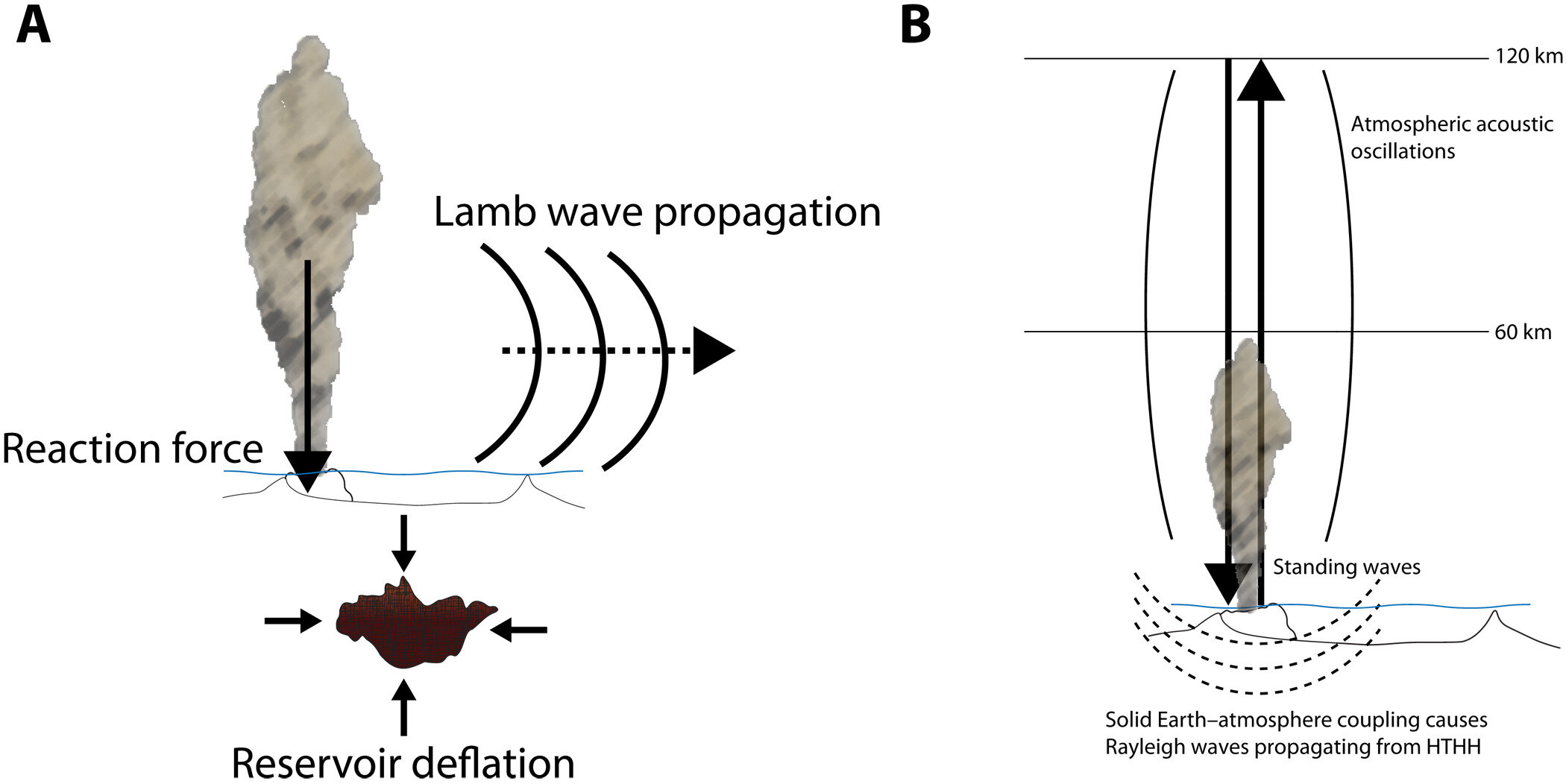 The submarine volcano eruption of Hunga Tonga-Hunga Ha’apai that occurred on January 15, 2022, generated impulsive downward reaction forces on Earth, radiating seismic waves throughout the planet. Geologists analyzed the teleseismic waves and Rayleigh waves at approximately 50 seconds to determine the force history and provide insights into the overall volcanic eruption process. The acoustic waves generated during the process produced broadband ground motions across the land alongside conventional tsunami waves.

In a new report now published in Science Advances, Ricardo Garza-Girόn and a research team in Earth and Planetary Sciences at the University of California, Santa Cruz, the Earthquake Science Center California, and the seismological lab at Caltech and the University of Strasbourg, France, described the solid Earth-atmosphere interactions surrounding the process.

The Hunga Tonga–Hunga Ha’apai eruption that occurred on January 15, 2022, produced the highest plume of any prior volcanic eruption—due to the interactions between magma and water. The event produced a strong water vapor anomaly in the middle stratosphere due to the degree of magma-water interactions at the ocean surface, on account of the submarine volcanic eruption.

The process simultaneously produced almost 590,000 lightning strikes observed globally in the ionosphere and atmosphere, partially driven by an acoustic-gravity wave and via global seismic waves. The phenomenon was the largest eruption to occur since the 1991 eruption of Mount Pinatubo in the Philippines. In this work, Garza-Girόn and his team presented several seismic methods to quantify and represent the ground mechanisms surrounding the phenomenon.

Three fundamental forces contribute to the ground motion detected by seismometers relative to the 2022 Tonga eruption. These include direct seismic waves resulting from the eruptive process itself and two other interactions associated with atmospheric disturbances relating to the eruption of downward reaction forces and atmospheric acoustic waves, respectively. The downward reaction forces impacting the Earth can act at the source during rapid pressure deflation in the magma reservoir and conduit system to rapidly vent material in the eruption jet.

The process involved a complex combination of force systems that almost coincidentally acted to lower the pressure in the magmatic system to move material to the surface of the volcano and jet it out to the atmosphere. The research team put together a comprehensive, time-varying, analytical characterization process to provide insights into the seismic sources involved at the most energetic stage of the eruption.

The research team calculated the axisymmetric radiation of body waves and surface waves resulting from the source location to assess the process of rapid vertical venting seen during the explosive eruption. Taken together, the P-wave and Rayleigh wave signals showed the sequence of explosive eruptions that lasted approximately four and a half hours to generate the reaction forces seen across Earth.

Following these assessments, the researchers noted how the narrow-band long-period ground motions for the 2022 Tonga eruption showed similarities of resonant Rayleigh waves to those seen during the 1991 Pinatubo eruption. The oscillatory forces computed at the site of the source showed a large amplification at approximately 4,500 seconds after the event to indicate the time taken for the atmospheric acoustic standing modes to develop.

In this way, Ricardo Garza-Girόn and colleagues showed the profound implications of the dynamics of rare, very large volcanic eruptions. The observed wave motions resulting from the 2022 Tonga eruption spread across the land, sea and atmosphere. The bursty and energetic eruption process indicated interactions between water and magma, as well as dynamic changes in conduit stability.

The researchers computed the time-integrative cumulative forces acting on Earth during the most energetic volcanic event in recent years. The team of scientists further included seismological force impulse models to describe how further interactions between the land and air could be sustained during volcanic events through atmospheric acoustic oscillations.