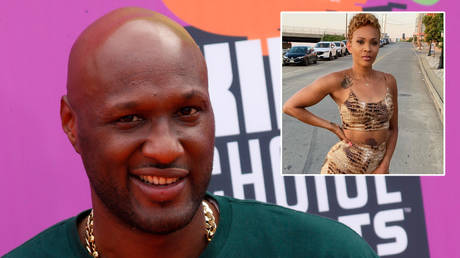 Troubled former NBA champion Lamar Odom, who was married to reality TV sensation Khloe Kardashian for seven years, has split up with his fitness model fiancee shortly after being blasted by his ex-wife on social media.

Former Los Angeles Lakers hero Odom had shared a steamy post with his girlfriend, top athlete and hugely popular fitness model Sabrina Parr, just weeks before she took to Instagram to announce that they were no longer an item.

Parr parted from the 40-year-old shortly after his ex-wife, Liza Morales, blasted him in a series of posts on Instagram story that ended with a demand for missing money for one of his three children with her.

“Let’s get to the real,” she wrote. “Where is Lamar Jr’s college money? We have been asking for it.”

In a post that suggested Odom could have been experiencing more of the addiction problems he has faced in his past, Parr revealed: “Lamar has some things that he alone needs to work through.

“I love him dearly but I am no longer able to be by his side while he seeks the help he so desperately needs.

“I wish him all the best and I am asking that you pray for everyone involved.”

Odom endured a litany of personal problems during his relationship with Khloe Kardashian, who he married a month after they met at a party for one of his Lakers teammates in 2009.

They included driving under the influence in 2013 and almost dying days after taking cocaine in 2015, when he suffered kidney failure and several heart attacks and strokes before being put on life support in hospital.

Odom made several appearances on the reality TV hit that made Khloe and her family stratospherically famous, ‘Keeping Up with the Kardashians’, and briefly starred in a spin-off with off with his then-wife before dropping out as it was axed after two series.

He has been involved in a series of court battles with Morales, who is also set to make her reality TV debut in new VH1 show Basketball Wives.

Parr and Odom seemed happy as they embraced each other at their engagement party less than two months ago on a day that he labeled “perfect”.

“It was so important to me for my family and friends – especially my daughter – to be there with me this time around,” Odom wrote on his platform.

Looming over his scantily-clad partner while topless in a gym last month, he called Parr his “baby doll” and “naturally stunning”, telling his following of more than 719,000 to download her “incredible” new ebook on body transformation.

He also looked trim as he worked out with a personal trainer and offered to send messages to fans after his engagement party, although he fell silent for several weeks before making a business-themed post in support of a black-owned technology company last week.

Odom started out at the Los Angeles Clippers as a teenager, spending four years with the team before a season with the Miami Heat.

The forward won his first NBA title with the Lakers in 2009, signing a long-term $33 million deal with the team in the same year.

He briefly returned to the Clippers but failed to find form and moved on to Spanish side Laboral Kutxa Baskonia.

After a spell with the New York Knicks, he joined Phillipine team Mighty Sports for a tournament in Dubai at the start of 2019 and had a spell in a US basketball league founded by rapper Ice Cube shortly afterwards.