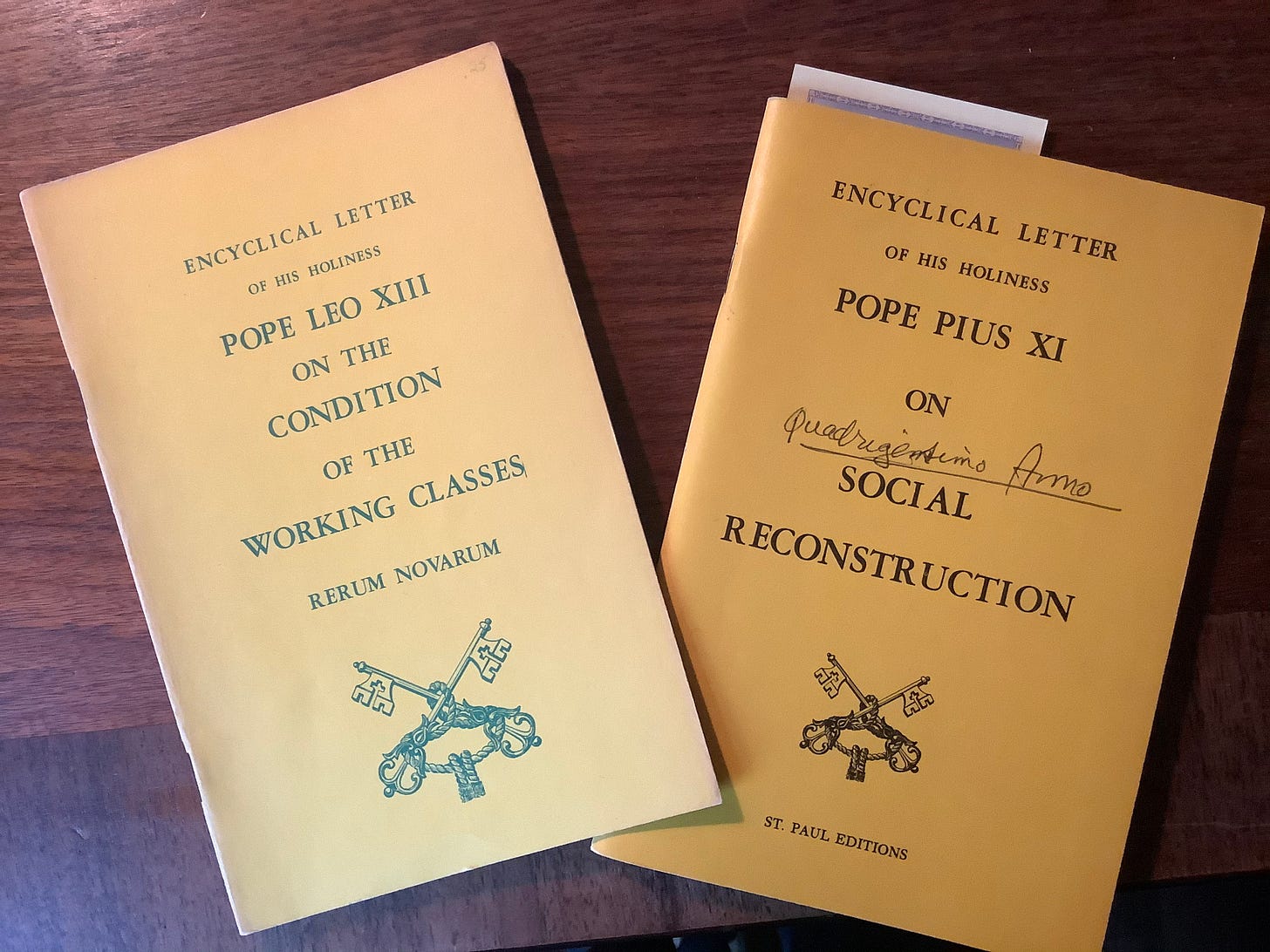 Orientation for new readers. More info at About page.

Thank you to the reader who posted a comment at Dual-use government officials of concern, with a link to the Wikipedia page on Subsidiarity (Catholicism).

That was a new word to me, and it’s hard to overstate how useful it is to have been pointed to it.

I read the linked material, and when I saw references to Pope Leo XIII’s 1891 encyclical On the Condition of the Working Classes (Rerum novarum) and Pope Pius XI’s 1931 encyclical On Social Reconstruction (Quadragesimo anno), I trotted upstairs to the beautiful collection of my late father’s Catholic books, found them both there and started reading.

Subsidiarity is the opposing social and economic moral principle to the globalists’ nightmare vision of a biologically- and digitally-controlled central government for the whole world.

As history abundantly proves, it is true that on account of changed conditions many things which were done by small associations in former times cannot be done now save by large associations. Still, that most weighty principle, which cannot be set aside or changed, remains fixed and unshaken in social philosophy: Just as it is gravely wrong to take from individuals what they can accomplish by their own initiative and industry and give it to the community, so also it is an injustice and at the same time a grave evil and disturbance of right order to assign to a greater and higher association what lesser and subordinate organizations can do. For every social activity ought of its very nature to furnish help to the members of the body social, and never destroy and absorb them.

The supreme authority of the State ought, therefore, to let subordinate groups handle matters and concerns of lesser importance, which would otherwise dissipate its efforts greatly. Thereby the State will more freely, powerfully, and effectively do all those things that belong to it alone because it alone can do them: directing, watching, urging, restraining, as occasion requires and necessity demands. Therefore, those in power should be sure that the more perfectly a graduated order is kept among the various associations, in observance of the principle of “subsidiary function,” the stronger social authority and effectiveness will be the happier and more prosperous the condition of the State.

Subsidiarity is a much better word than the word I’ve used up until this point: “relocalization.” More on that below.

Even more importantly, subsidiarity is a fully-developed social, political and economic moral philosophy that can be used to better challenge and defeat the Luciferian secularist-communist-socialist-capitalist-materialist enslavement system proposed by the deranged lunatics now gathered in Davos.

Subsidiarity can be used to build up the kinds of human societies that Our Lord Jesus Christ wants us to live in, instead.

Long-time readers may already know, but new readers probably not, that my background from 2005 to 2019 prepared me for the work I do in Covid-times.

Long story short, I read Richard Heinberg’s The Party’s Over: Oil, War and the Fate of Industrial Society in 2005, and found the geopolitical and historical analysis highly motivating. I wanted to be part of restoring local water, food, energy and manufacturing systems to be more resilient to fuel supply and price shocks, so that present and future generations — children, grandchildren, great-grandchildren — could not just survive but thrive.

Within a year or two, I connected with Thomas Linzey of the Community Environmental Legal Defense Fund (CELDF), which was a spin-off of Richard Grossman’s Program on Corporations, Law and Democracy (POCLAD). For 15 years, I worked on several local-level community organizing campaigns aimed at confronting the legal principle of “preemption,” which is a human social, political and economic organization system in which power is centralized at higher level of authorities, by taking power from lower levels of authorities.

Preemption proved to be a major obstacle for people trying to restore local water, food, energy and manufacturing systems.

As Dillon put it:

“Municipal corporations owe their origin to, and derive their powers and rights wholly from, the legislature. It breathes into them the breath of life, without which they cannot exist. As it creates, so may it destroy. If it may destroy, it may abridge and control”

Community campaigns built on the POCLAD/CELDF historical analysis, were and still are a vigorous attempt to resist preemption and restore self-governing power and socio-economic sovereignty at the local and individual level, although CELDF itself has gone woke, which is sad.

In fact, throughout the millennia of human social, political and economic struggle, there have been people pushing for decentralization.

In Dillon’s day, one of the leading voices was another judge, Thomas Cooley, who wrote what’s become known as the Cooley Doctrine:

“Local government is a matter of absolute right; and the state cannot take it away”

I no longer find peak oil data sources to be credible, because they are controlled by the same globalist institutions that have fully corrupted the academic, scientific, public health, and food and drug regulation systems.

Covid-19 has revealed that capture-and-control program, and the massive structural lies underneath it, in great detail.

As a result, I no longer regard the geopolitical analysis built on peak oil evidence to be accurate.

But I still think restoring individual and local control of essential things like water, food, energy and manufacturing is a good set of goals.

Whether supply and price shocks are caused by impersonal geochemical factors (dwindling access to cheap liquid fuel oil) or by depraved men and women trying to kill most of the world’s people while passing themselves off as “a select group” of heroic “extraterrestrials” saving the planet, the sensible response is the same.

Get the power out of the hands of the crazy people, and put it in the hands of ordinary people who are trying to work hard, live in decent homes and neighborhoods, drink clean water, eat nourishing food, raise good kids and serve God.

By the end of 2019, I had spent 15 years researching, writing about and working with the preemption principle — and its opposite, the clunkily-named relocalization — in the communities where I’ve lived. The “think globally, act locally” thing.

This is why, when governments around the world suddenly took over every aspect of every individual’s daily life in March 2020, through weaponized fear and ignorance passed through ordinary family, friend, neighbor and workplace relationships — I was primed to recognize it for the preemption-based, global power grab that it was.

I recognized it, but I didn’t understand the mechanisms.

I didn’t understand how it was being done, until the Jan. 30, 2022 Todd Callender podcast, which was the crucial lead that took me into the dark caves of American statutory, regulatory, and executive/administrative history, where I’ve been spelunking for almost a year.

Covid-times exposed the preemption doctrine — the opposite of subsidiarity — imposed on a global scale.

See Sept. 22, 2022 Laundering with Immunity: The Control Framework – Part 1, by Corey Lynn at Corey’s Digs, for an excellent overview of sovereign immunities claimed by transnational quasi- and non-governmental organizations under the US International Organizations Immunities Act of 1945, which is applicable to “any international organization in which the United States participates”:

They do not operate above the law, they operate entirely outside of the law.

We already know a lot about how the Pfizer contracts preempt nation-state power to adopt tighter drug regulation laws, for example, and put national assets like military bases up as collateral that can be seized if legislators start to get out of line.

The same mechanism is probably also in place to control the valid, legitimate US Government that exists underneath the invalid, illegitimate one whose imposter, criminal spokesmen include Secretary of Health and Human Services Xavier Becerra and Defense Secretary Lloyd Austin.

There’s probably something in the undisclosed government-pharmaceutical contracts that incorporates BIS and SWIFT as parties, such that any government moves to stop the killing will immediately cut off access to financial systems and loans.

Support for this hypothesis comes from 2013 and 2015 reporting by French and Italian reporters — sent to me by another reader — about how central bankers working through the Bank of Italy, cut the Vatican off from credit card processing services in January 2013.

The central banking cabal thereby coerced the partial abdication of Pope Benedict XVI — announced on Feb. 11, 2013 — to pave the way for installation of Jorge Bergoglio as Pretend-Pope Francis.

Satisfied with Pope Benedict’s announcement, Vatican access to international banking was restored by the central bankers on Feb. 12, 2013.

They just need to understand and prepare to withstand the financial consequences.

“And let me make it quite clear that when Christians say the Christ-life is in them, they do not mean simply something mental or moral. When they speak of being ‘in Christ’ or of Christ being ‘in them’, this is not simply a way of saying that they are thinking about Christ or copying Him.

They mean that Christ is actually operating through them; that the whole mass of Christians are the physical organism through which Christ acts — that we are His fingers and muscles, the cells of His body.

And perhaps that explains one or two things. It explains why this new life is spread not only by purely mental acts like belief, but by bodily acts like baptism and Holy Communion.

It is not merely the spreading of an idea; it is more like evolution—a biological or superbiological fact. There is no good trying to be more spiritual than God. God never meant man to be a purely spiritual creature. That is why He uses material things like bread and wine to put the new life into us.

We may think this rather crude and unspiritual.