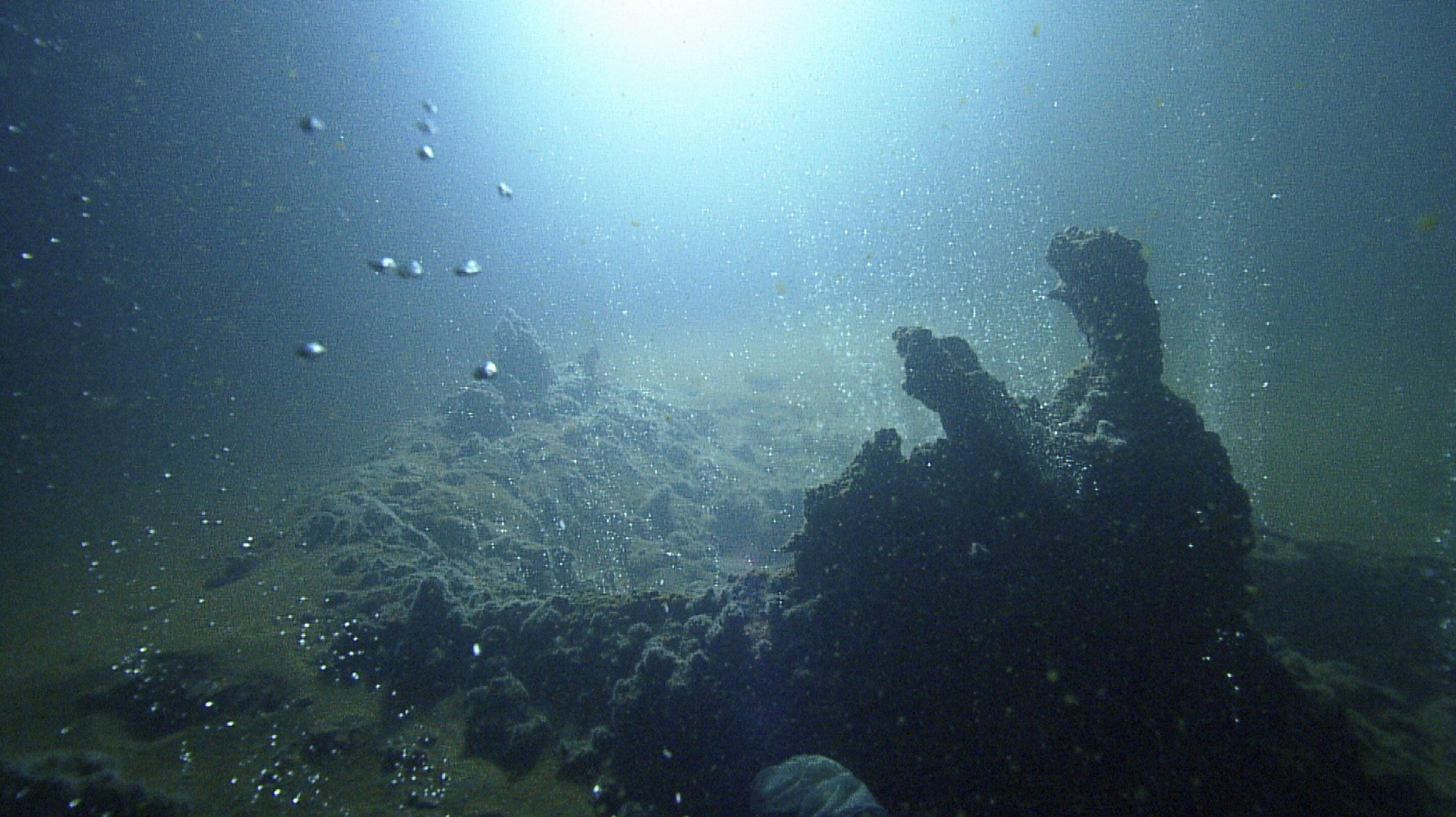 Using a novel imaging technique for volcanoes that produces high-resolution pictures of seismic wave properties, a new study reveals a large, previously undetected body of mobile magma underneath Kolumbo, an active submarine volcano near Santorini, Greece. The presence of the magma chamber increases the chances of a future eruption, prompting the researchers to recommend real-time hazard monitoring stations near other active submarine volcanoes to improve estimations of when an eruption might be likely to occur.

Nearly four hundred years ago, in 1650 C.E., Kolumbo breached the sea surface and erupted, killing 70 people in Santorini. This eruption, not to be confused with the catastrophic Thera (Santorini) volcanic eruption that occurred around 1600 B.C.E., was triggered by growing magma reservoirs beneath the surface of Kolumbo. Now researchers say the molten rock in the chamber is reaching a similar volume.

The study, published in Geochemistry, Geophysics, Geosystems, was the first to use full-waveform inversion seismic imaging to look for changes in magmatic activity beneath the surface of submarine volcanoes along the Hellenic Arc, where Kolumbo is located.

Full-waveform inversion technology is applied to seismic profiles—recordings of ground motions along kilometers-long lines—and assesses differences in wave velocities that may indicate subsurface anomalies. The study showed that full-waveform inversion technology can be used in volcanic regions to find potential locations, sizes and melt rates of mobile magma bodies. Seismic profiles were constructed after the researchers fired air-gun shots from aboard a research vessel cruising over the volcanic region, triggering seismic waves that were recorded by ocean bottom seismometers located along the arc.

“Full-waveform inversion is similar to a medical ultrasound,” said M. Paulatto, a volcanologist at Imperial College London and second author of the study. “It uses sound waves to construct an image of the underground structure of a volcano.”

According to the study, a significantly decreased velocity of seismic waves that travel beneath the seafloor indicates the presence of a mobile magma chamber underneath Kolumbo. The characteristics of the wave anomalies were used to develop a better idea of the potential hazards the magma chamber may present.

According to Kajetan Chrapkiewicz, geophysicist at Imperial College London and lead author of the study, existing data for submarine volcanoes in the region were sparse and blurry, but the dense array of seismic profiles and full-waveform inversion has allowed them to obtain much sharper images than before. These were used to identify a large magma chamber that has been growing at an average rate of roughly 4 million cubic meters per year since Kolumbo’s last eruption in 1650 C.E.

The total volume of melt that has accumulated in the magma reservoir beneath Kolumbo is 1.4 cubic kilometers, the study found. According to Chrapkiewicz, if the current rate of magma chamber growth continues, sometime in the next 150 years Kolumbo could reach the 2 cubic kilometers of melt volume that was estimated to be ejected during the 1650 C.E. eruption. Although volcanic melt volumes can be estimated, there is no way to tell for sure when Kolumbo will erupt next.

The characteristics of the magmatic system at Kolumbo indicates a highly explosive eruption, similar but of a lesser magnitude than the recent Hunga Tonga-Hunga Ha’apai eruption in the future, according to the study’s authors. Although danger doesn’t appear to be imminent, an explosion at the Kolumbo volcano could be more disastrous than the Tongan eruption due to its proximity to the population center of Santorini, Greece, located only 7 kilometers (4 miles) from the volcano.

Kolumbo is found in a relatively shallow part of the Mediterranean Sea at around 500 meters (1600 feet) deep, which according to current estimations, is likely to enhance its explosivity. A tsunami and an eruptive column tens of kilometers high with large amounts of ashfall are predicted to occur when Kolumbo erupts.

Jens Karstens, a geophysicist at the GEOMAR Helmholtz Centre for Ocean Research Kiel who was not involved in the study, underscored the importance of the recent findings. “With studies like this, we can learn more about how volcanic structures work, what to expect and where to expect it, and can use that to design monitoring systems for underwater volcanoes.”

The study adds to the growing knowledge base of Kolumbo—the most active submarine volcano in the Mediterranean—and the hazards it poses. According to the researchers, full-waveform inversion technology can be used to identify similar magma reservoirs hiding beneath other active submarine volcanoes, but it can be a spatially restrictive and time-consuming process that would be best used in combination with other techniques, such as volcanic sediment drilling and seismographic monitoring, to help form a better idea of what’s really going on under submarine volcanoes.

Over the last several years, an international team of scientists has been working on establishing SANTORini’s seafloor volcanic observatorY, or SANTORY, a seafloor observatory outfitted with scientific instruments that will be able to measure progressions in Kolumbo’s volcanic activity. SANTORY is still under development, but according to Chrapkiewicz, it is a good example of what a submarine volcanic monitoring station can potentially look like.

As Paulatto points out, there are more land-based monitoring stations for continental volcanoes than there are for submarine volcanoes. Monitoring volcanic activity underneath the ocean surface is more complicated and expensive than it is on land. However, that doesn’t make it less important, Paulatto said. The researchers hope that this study, in combination with the data collected by SANTORY and the International Ocean Discovery Program Expedition 398 sediment drilling cruise, will help convince policymakers of the critical importance for real-time monitoring stations on submarine volcanoes.

“We need better data on what’s actually beneath these volcanoes,” Chrapkiewicz said. “Continuous monitoring systems would allow us to have a better estimation of when an eruption might occur. With these systems, we would likely know about an eruption a few days before it happens, and people would be able to evacuate and stay safe.”