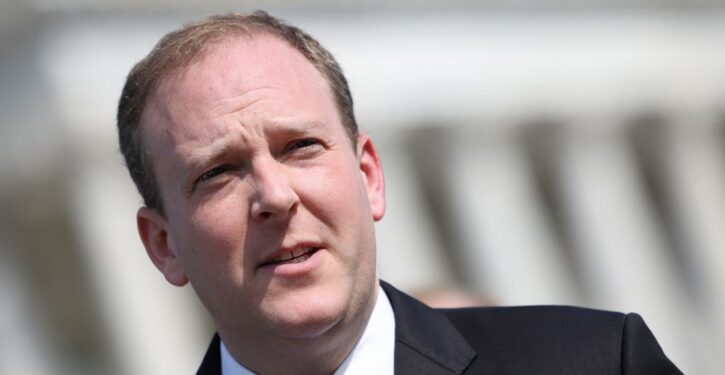 Republican New York Rep. Lee Zeldin was attacked Thursday during a campaign speech about bail reform in upstate New York by a suspect allegedly armed with a blade.

A man pulled out a blade and attempted to stab Zeldin, to which the representative quickly grabbed his wrist and forcefully prevented the knife from stabbing him, Zeldin’s campaign said in a press release.  A group of people immediately detained the attacker and helped the gubernatorial candidate up, where he could be seen watching the incident calmly from further back on-stage, according to video posted on Twitter.

New York Assemblyman Josh Jenson credited Republican Lt. gubernatorial candidate Alison Esposito and American Veterans (AMVETS) director Joe Chenelly, along with others, for successfully restraining the attacker and preventing a possible escalation of the situation. Esposito was reportedly cut with the blade while detaining the attacker, Thomas Corlett, a senior staff member and field director for Zeldin, told the Daily Caller.

The Monroe County Sheriff’s Office arrived at the scene within five minutes and arrested the suspect, according to Corlett. An investigation is currently being conducted by the department. (RELATED: Rep. Zeldin Says Democratic Election Plan Is To Call Republicans ‘White Supremacists, Extremists, Nazis’ Every Two Years)

“[The Sheriff’s Office is] aware of an incident at the speech of gubernatorial candidate Zeldin this evening. A suspect is in custody and Major Crimes is investigating. We will update as further information becomes available,” the department said, according to Fox News.

After the attack, the representative apparently returned to the stage and finished his speech, reported witnesses said.

“Thank you to everyone who reached out following tonight’s attack in Fairport,” Feldin said on Twitter. “Someone tried to stab me on stage during this evening’s rally, but fortunately, I was able to grab his wrist and stop him for a few moments until others tackled him.”

“I’m ok, and @EspositoforNY and all other attendees are safe,” he continued. “The attacker is in custody. Grateful for the attendees who stepped up quickly to assist and the law enforcement officers who quickly responded. I’m as resolute as ever to do my part to make NY safe again.”

I’m ok, and @EspositoforNY, and all other attendees are safe. The attacker is in custody. Grateful for the attendees who stepped up quickly to assist and the law enforcement officers who quickly responded. I’m as resolute as ever to do my part to make NY safe again.

In a press release, Zeldin’s campaign criticized “out of control crime and violence” in New York but said it is grateful that Zeldin and others were ultimately safe.

“Congressman Zeldin, Alison Esposito and all members of Team Zeldin are safe following tonight’s attack,” a spokesperson said. “Far more must be done to make New York safe again. This is very much getting out of hand in this state. Unfortunately, Congressman Zeldin is just the latest New Yorker whose life has been affected by the out of control crime and violence in New York. This needs to stop! Thankfully, we still have exceptional men and women in law enforcement answering the call to protect our streets.”

Corlett said Zeldin is in “good spirits” and is “even more motivated” to fight the rampant crime and attacks erupting in the state of New York.