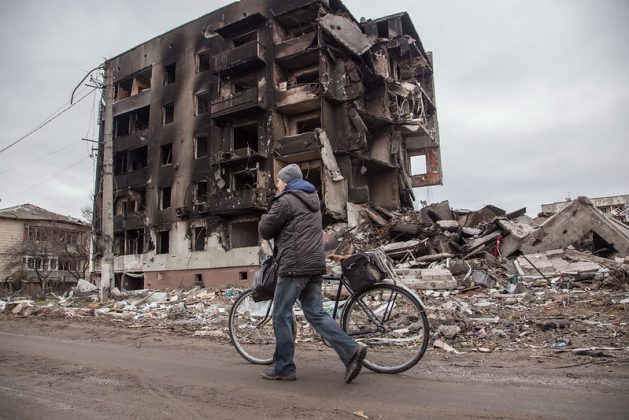 BRATISLAVA, Nov 10 (IPS) – Since the start of Russia’s invasion of Ukraine, the conflict’s potential to escalate to the use of nuclear weapons has been highlighted by political analysts and military experts alike.

Now growingly bellicose rhetoric from Russian president Vladimir Putin, particularly following the illegal annexations of four parts of Ukraine at the end of September, has raised fears he may be seriously considering using them. He has been quoted in September this year as saying that Russia would use “all available means to protect Russia and our people”, but last month said there was no need to consider the use of nuclear weapons. This week Russia ordered troops to withdraw from the Dnieper River’s west bank near the southern city of Kherson.

But while much of the media debate around this prospect has focused on the expected use of a so-called low-yield “tactical” nuclear weapon and what this might mean strategically for either side in the war, anti-nuclear campaigners say any discussion should be reframed to reflect the devastating reality of what the use of even the smallest weapons in modern nuclear arsenals would mean.

They say that even if only one such bomb was dropped, be it in Ukraine or in any other conflict, the consequences would cause a country – if not a continent-wide catastrophe, with horrific immediate and long-term health effects and a subsequent humanitarian disaster on a scale almost certainly not seen before.

Moreover, they say, a single strike would almost certainly be met with a similar response, quickly igniting a full-scale nuclear war that would threaten much of human life on earth.

“There is no conceivable reality in which a nuclear weapon is used, and life goes on as normal. It is very, very likely that there would be escalation and additional nuclear weapons used, but even the use of one nuclear weapon would break a decades-long taboo on the use of the most catastrophic, horrific weapon ever created,” Alicia Sanders-Zakre, Research, and Policy Coordinator,  at the International Campaign to Abolish Nuclear Weapons (ICAN) told IPS.

“We have already seen the global impacts of the war in Ukraine just using conventional weapons, including worldwide rising inflation, and energy and food shortages. But the use of a nuclear weapon would really have consequences beyond what any of us can imagine,” she added.

Since the bombing of Hiroshima and Nagasaki in 1945 – the only time nuclear weapons have been used in conflict – a number of states have built up nuclear arsenals, including bombs many times more powerful than those dropped on the two Japanese cities.

But they also include bombs that can be set to have varying explosive yields -which are measured in kilotons – including potentially in just single figures. For comparison, the devices dropped on Hiroshima and Nagasaki had yields of around 15 kilotons.

These lower yield bombs are, unlike strategic nuclear weapons with yields in the hundreds of kilotons that, are specifically meant to cause mass destruction and serve a deterrent purpose, designed for use on a battlefield to counter overwhelming conventional forces.

The strategic thinking behind their use is that they could cause maximum damage to enemy troops in specific areas without the wider massive destruction caused by larger bombs.

This does not mean, though, that tactical nuclear weapons are not devastatingly lethal – an estimated 130,000 people were killed by the atomic bomb dropped on Hiroshima, while NUKEMAP predicts that even a 5-kiloton bomb detonation on Kyiv would leave more than 90,000 people dead, and injured.

Campaigners against nuclear weapons worry the global public is not being made properly aware of the scale of the loss of life and ecological damage which would be wrought by the use of such a weapon.

“There has been a lot of discussion about using a tactical nuclear bomb in Ukraine. But the use of the word ‘tactical’ is no more than a rebranding exercise to make a nuclear weapon sound like a conventional one,” Dr Ruth Mitchell, Board Chair of the International Physicians for the Prevention of Nuclear War (IPPNW), told IPS.

“A tactical nuclear weapon would be about the same size as the one dropped on Hiroshima and Nagasaki, and we don’t need to imagine what the effects would be; we have already seen them,” she added.

The death toll itself would be massive, but authorities would also have to deal with radioactive fallout possibly contaminating large areas, while the event itself would trigger massive population dislocation.

And a report by ICAN also shows that even the most advanced healthcare systems would be unable to provide any effective response in such a situation, highlighting the likely destruction of local healthcare facilities and staff and pointing out that the 1945 atomic bombing of Hiroshima destroyed 80% of its hospitals and killed almost all its doctors and nurses.

Healthcare staff in Ukraine have told IPS that preparations are being made at hospitals and healthcare facilities to respond to a nuclear attack, including plans for reprofiling wards and forming special teams of emergency staff to treat those affected both directly in the area of any strike and where needed in other parts of the country.

Meanwhile, authorities in cities have said potential evacuation centres have been set up, and supplies of potassium iodide, which can help block the absorption of harmful radiation by the thyroid gland, have been secured to be distributed if needed.

Some doctors have said they are also counting on international help for Ukraine’s healthcare response if the worst to happen.

But Mitchell said while admirable, such efforts were likely to be of little help.

“It is naïve to think there is a terrible amount that we can do in the event of use of a nuclear weapon against civilian populations, which is the only way any will ever be used. They will be used strategically, i.e., on a populous city. No one’s going to be dropping them in a paddock. It would be a massive disaster,” she said.

Some Ukrainian doctors admit they may not be able to provide much help.

“If the hospital is hit with a bomb then there won’t be much we can do,” Roman Fishchuk, a doctor at the Central City Clinical Hospital in Ivano-Frankivsk in western Ukraine told IPS.

Another key issue, Mitchell said, is the fact that any use of a nuclear weapon in a conflict situation, be it in Ukraine or anywhere else, would almost certainly not be left in isolation.

There would likely be a response in kind, followed by a very rapid escalation to nuclear war and multiple missile detonations, with terrifying planet-wide consequences, she said.

A recent report by experts studying the potential effects of a nuclear conflict concluded that while more than 5?billion could die from a war between the United States and Russia, “even a war between India and Pakistan using less than 3% of the global nuclear arsenal” could result in famine for a third of Earth.

ICAN’s Sanders-Zakre explained that the current situation in Ukraine has only highlighted the need for nuclear weapons to be abolished across the world, and how more attention needs to be paid to experts pointing out their potential for civilisation-threatening destruction.

“What this shows is that we really need to listen to medical professionals, and organisations like IPPNW. They have been warning for decades about the consequences of using nuclear weapons, and we have learned from the catastrophic Covid-19 pandemic that it is essential that we listen to professionals and experts and take their expertise seriously, and it’s the same in this case with the use of a nuclear weapon,” she said.

Meanwhile, in Ukraine, people are preparing for the worst. Some have begun stocking rooms converted into bomb shelters with food and other supplies they believe will help them ride out the aftermath of a nuclear strike. Others have been buying potassium iodide tablets.

But some say they have little faith they would survive any such attack and are just hoping it will never happen.

“The Health Ministry has given out advice on what to do if there is a nuclear attack, and I know some of the basic things to do, but I don’t feel like I’m prepared to deal with something like this if it happens. I just hope we won’t have to deal with this. It would be horror,” 23-year-old Kyiv resident Viktoria Marchenko (NOT REAL NAME) told IPS.