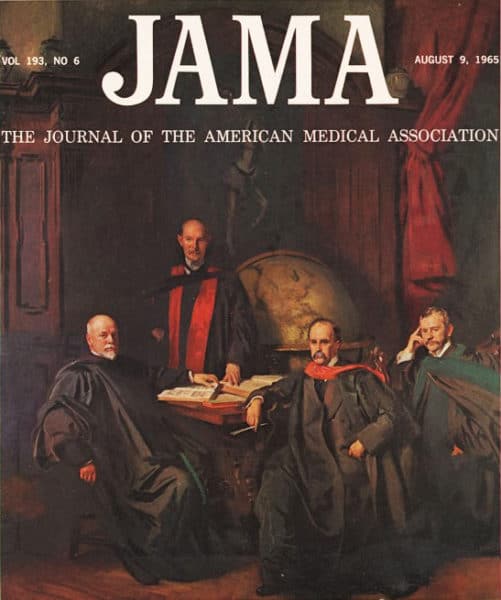 It just follows the science.

This video is available on Rumble, BitChute, and Odysee.

The Journal of the American Medical Association, or JAMA, was a prestigious scientific publication before it went soft in the head on race. This study found that the brains of blacks, compared to the brains of whites, have more disorders that are common in people with Alzheimer’s, and that blacks’ brains start shrinking earlier.

Just one guess as to why. Racism.

In all modesty, I could have told them that black brains probably age more quickly than white brains, even without all the fancy MRI scans they took. Unlike the three PhDs who wrote this paper — and their 10 sidekicks — I read Race Evolution and Behavior by J. Philippe Rushton. The great psychologist Arthur Jensen said it was “the most impressive theory-based study . . . of the psychological and behavioral differences between the major racial groups that I have encountered in the world literature on this subject.”

That, of course, is why many of you have never heard of Race, Evolution and Behavior. I was lucky enough to know the author, Phil Rushton, quite well. According to evolutionary theory, genes care about only one thing: making more copies of themselves. That means keeping an organism alive long enough to reproduce. There are different strategies for this, which can be ranked on what is called the r – K spectrum. If you want to know what the letters stand for, look up r – K theory.

This illustration from Rushton’s book explains r – K in terms of egg production and childbearing. At the r extreme is the lady oyster, which produces 500 million eggs a year. She just turns them loose in the ocean, in the hope that a gentleman oyster nearby has just let fly with his sperm. It’s very hit or miss, but oysters produce so many potential babies that enough survive. There’s not one second of parental involvement. Young oysters are on their own right from the start, and grow up quickly.

As you advance through the animal kingdom, you get species that put less effort into reproduction itself. The higher mammals produce small numbers of young, but then nurse them and take good care of them. Some species even have social organizations — like families of lions or bands of apes — that help care for babies that would die if they weren’t looked after — sometimes for years. Compared to oysters or frogs, this is extreme parental attachment. As you go up the K scale, animals also have bigger brains and live longer.

We humans are at the top of the K scale. What Rushton pointed out, though, was that the three major racial groups — Europeans, Africans, and East Asians — can also be ranked on the r – K scale, with blacks consistently more r, and Asians consistently more K, and whites in between. Some of these differences are clearly biological, while others are differences in behavior. The result is what Rushton called racial differences in “life history.” Rushton did not study Hispanics, because they are a highly varied population, and the data for them are not as good.

Here are differences that are either clearly or almost certainly biological, along with how the three races differ. Blacks have the shortest gestation time, and are born smaller than whites and Asians, but their babies develop more quickly. They can walk and turn over sooner than white babies, who can do that sooner than Asian babies. Slow development is more K. Humans babies are helpless for longer than any other species.

Rates of fraternal twinning differ by race. It’s twice as common in Europeans than in Asians, and twice as common in Africans than in Europeans. Twinning, which means smaller, weaker babies and less parent time for each of them, is more like the oyster strategy. The Japanese were traditionally very suspicion of multiple births. They thought they were like the litters of animals. Finally, Asians live the longest, Europeans are in the middle, and Africans have the shortest lifespans. Asians have the lowest levels of testosterone and blacks have the highest. There are differences in penis size, and yes, we have good data for this. When AIDS became a scourge, relief agencies gave away millions of free condoms. They had to send small ones to Asia, middle-sized ones to Europe, and big ones to Africa. There are also expected differences in intercourse frequency and also average rates of AIDS and syphilis. And, finally, there is marital stability. When couples stay together and devote themselves to children, it is very K. Asians have the lowest rates of divorce and illegitimacy; blacks have the highest

Like it or not, when you see a headline like this “Tennessee’s deadbeat dads: The three men who have fathered 78 children with 46 different women,” you can be almost certain it’s about black fathers. Finally, here are some of the other important racial traits on which the three races differ.

Brain size is correlated with intelligence, and with MRI imaging, we know that Asians have the largest brains, then whites, then blacks. We find the same pattern in average IQ, and also in cultural achievements, although I think you could rank whites somewhat higher than Asians.

All this adds up to differences in life history. Compared to whites and Asians, blacks mature more quickly, have more sex with more partners, have more children they don’t look after, and die younger. Some of this is clearly biology and some is behavior, but we know from twin studies that genes have a strong influence on behavior. r is just a reproductive strategy. It works for oysters and, as we saw in that Tennessee story, it works very well for blacks who live in a welfare state rather than in Africa.

Needless to say, Rushton’s book is about averages. There are blacks who are very K – high IQ, stable marriage, intense investment in children — and Asians who are very r. Even children in the same family can differ on the r – K scale.

One sister drops out of high school, never gets a real job, and has children with three different men, while the other is a model wife and mother.

As for the racial pattern Rushton described, I think it’s factually irrefutable, and brilliantly explains behavior patterns we see, not just in the US but around the world. If there were a Nobel Prize in psychology — and we lived in a sane world — Ruston would have deserved it. Back to the JAMA article. Race differences in brain aging would fit perfectly with human r – K. The article didn’t study East Asians, but I bet their brains age more slowly than the brains of whites. And racism? Racism doesn’t make black babies walk at 11 months while white babies walk at 12. And I would bet any amount of money racism doesn’t make black brains age more quickly than white brains. Of course, this kind of thinking is heresy. If you believe, as JAMA does, that race is just an illusion, your brain locks up rather than notice race differences, much less see the r – K pattern. That’s hate, not matter how much it makes sense or how well it explains the world we live in. Whether he does or not, next week I’ll talk about the best scientific explanations for why the three major races turned out the way they did.