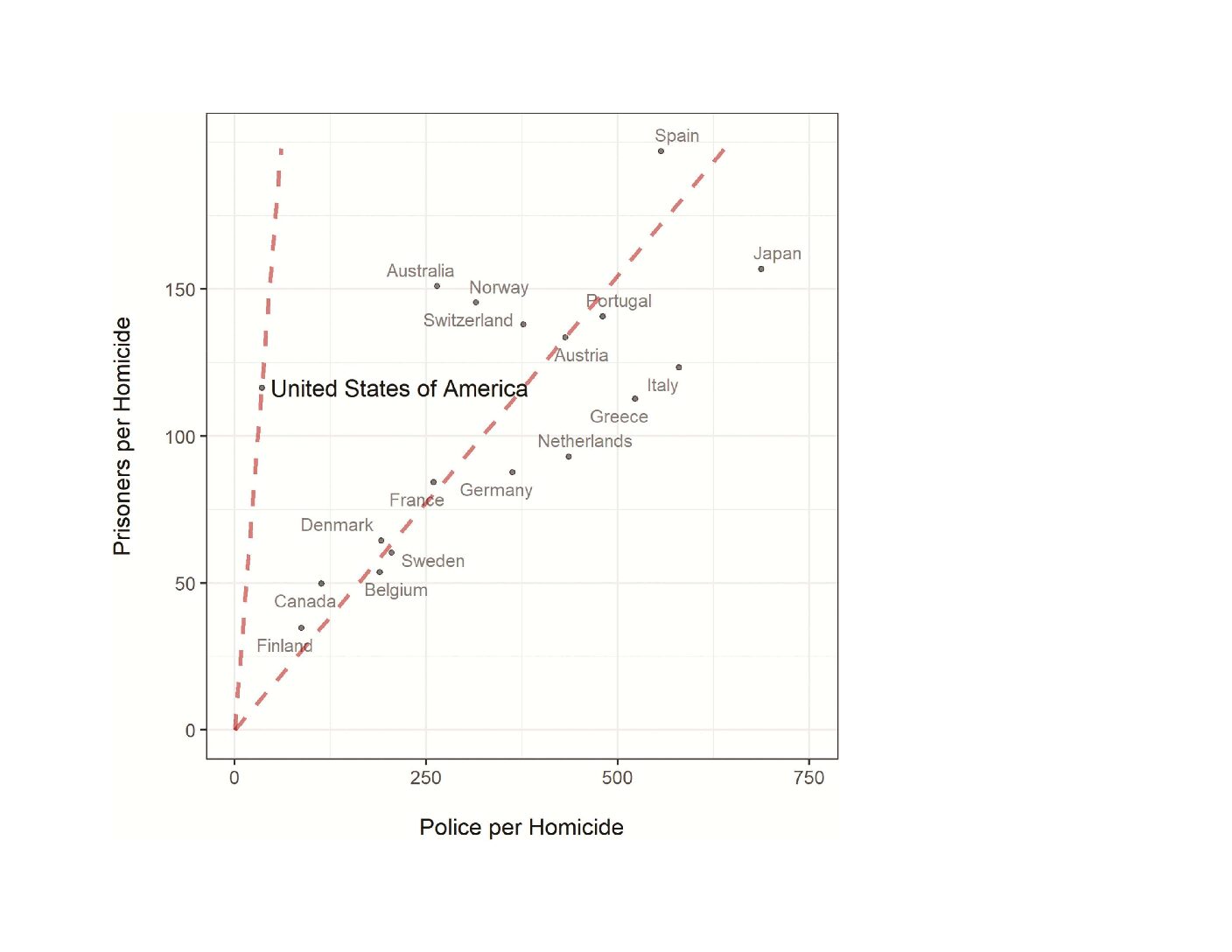 America incarcerates fewer people per homicide than countries like Australia, Japan, Switzerland, and Australia, as you can see from the graph above.

Europe spends more of its economy on its police than the U.S. does. As a result, Europe has both a lower murder rate, and a lower rate of killings by the police. More cops on the beat means they can solve more murders, and catching murderers deters murders from being committed. If a murderer doesn’t think he will be caught, he may commit murder even if there are strict penalties for the few murderers who are caught. Nothing is more important in deterring crime than the rate at which criminals are caught.

More cops on the beat also means they spend more time getting to know the communities they serve. That makes them more knowledgeable and effective, and less likely to get into unnecessary violent encounters.

As Daniel Bier notes, “As a share of GDP, the EU [European Union] spends 33% more than the US on police.” “European countries almost uniformly spend a much larger share on police than US states, though just how much larger varies wildly.”

People who want to cut sentences for violent criminals cite rising U.S. incarceration rates since the 1960s, which they call “mass incarceration.” But rising imprisonment rates for violence were necessary due to the huge increase in the violent crime rate between 1960 and 1990, and the fact that penalties for murder were laughably short in the 1960s and early 1970s (murderers spent only about four years in prison, which was a mockery of justice). As Professor Barry Latzer noted in the Wall Street Journal, “murderers released in 1960 had served a median 4.3 years, which wasn’t long to begin with. By 1970 that figure had dropped to 3.5 years.” “Between 1960 and 1990, the rate of violent crime in the U.S. surged by over 350%, according to FBI data, the biggest sustained buildup in the country’s history.”

As a Manhattan Institute researcher noted in The Wall Street Journal,

Contrary to the advocates’ claim that the U.S. criminal-justice system is mindlessly draconian, most crime goes unpunished, certainly by a prison term. For every 31 people convicted of a violent felony, another 69 people arrested for violence are released back to the streets, according to a 2007 analysis of state courts by the Bureau of Justice Statistics. That low arrest-to-conviction rate reflects, among other things, prosecutors’ decisions not to go forward with a case for lack of cooperative witnesses or technical errors in police paperwork. The JFA Institute estimated in 2007 that in only 3% of violent victimizations and property crimes does the offender end up in prison.

Far from being prison-happy, the criminal-justice system tries to divert as many people as possible from long-term confinement. “Most cases are triaged with deferred judgments, deferred sentences, probation, workender jail sentences, weekender jail sentences,” writes Iowa State University sociologist Matt DeLisi in a forthcoming issue of the Journal of Criminal Justice.

Offenders given community alternatives “are afforded multiple opportunities to violate these sanctions only to receive additional conditions, additional months on their sentence, or often, no additional punishments at all,” Mr. DeLisi adds. In 2009, 27% of convicted felons in the 75 largest counties received a community sentence of probation or treatment, and 37% were sentenced not to prison but to jail, where sentences top out at one year but are usually completed in a few weeks or months. Only 36% of convicted felons in 2009 got a prison term.

Incarceration keeps dangerous criminals in jail where they can’t kill other people. When offenders are released early, that results in lots of killings. That is happening in the City of Baltimore. Baltimore’s homicide rate has risen since 2014. Over 200 people were killed in Baltimore in just the first seven months of this year, about as many as died in all of the year 2014, even though Baltimore’s population has shrunk a lot since 2014.

Murders have risen there because prosecutors haven’t been seeking long sentences for people who commit serious crimes. As a result, criminals are soon back on the street, where many of them go on to murder innocent people. Most murders in Baltimore are committed by people who previously were convicted of a serious crime, but didn’t serve a lengthy sentence for that crime. As City Journal notes, “serious crimes” are being “handled gently” by the city’s district attorney, Marilyn Mosby:

Maryland Public Policy Institute researcher Sean Kennedy, who studied 110 homicide cases arising from January 2019 to July 2020, found that suspects in 77 of these had been previously convicted of a serious crime by Mosby’s office. Sixty-one of them (79 percent) faced statutory jail terms that should have kept them in prison beyond the date on which they allegedly committed the homicide.

If these criminals had been kept in jail longer, that would have kept them from killing anyone.

Longer prison sentences also deter violent crimes and theft by people who are not currently incarcerated. Crime in California fell significantly after California voters adopted Proposition 8, which mandated longer sentences for repeat offenders who kill, rape, and rob others. A National Bureau of Economic Research study found those longer sentences deterred many crimes from being committed. As it observed, three years after Proposition 8 was adopted, crimes punished with enhanced sentences had “fallen roughly 20-40 percent compared to” crimes not covered by enhanced sentences. Similarly, a 2008 Santa Clara University study found that longer sentences for three-time offenders led to “significantly faster rates of decline in robbery, burglary, larceny, and motor vehicle theft,” even after controlling for pre-existing crime trends and economic, demographic, and policy factors.