The Secret Language Of Weekdays 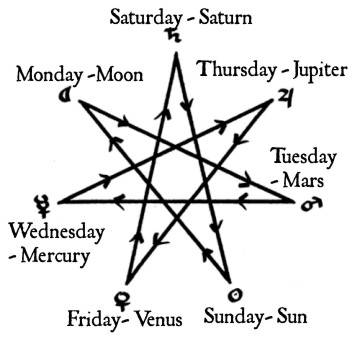 It really only takes a rudimentary grasp of basic astronomy to understand why we measure time with months and years. But why weeks? What is the special significance of seven days? And how far back can we trace our modern weekday origins?

If a month is (roughly) the amount of time it takes for the moon to complete a full cycle, then dividing each 28-day period into four equal chunks is rather convenient if you’re in the habit of observing the moon’s four distinct phases (new, full, and both quarter moons).

The Sumerians were arguably the first people to think of this, but the Babylonians took this concept and ran with it.

The Babylonians were very into astrology and astronomy, and they were hip to the fact that seven wasn’t just the approximate number of days between moon phases. It was also the number of visible planets or celestial bodies in the sky that were known to humans at the time: the Moon, the Sun, Mercury, Venus, Mars, Jupiter and Saturn.

Once the Romans became hot to trot, they named the days of the week after the planets, or more appropriately, after their gods, who are associated with the heavenly bodies.

The way that they’re ordered is also very logical. If you go in order from Monday to Sunday, you get the Moon’s day, then Mars, Mercury, Jupiter, Venus, Saturn, and the Sun. Now, compare that to the ascending Chaldean order of the planets (which arranges them from fastest-orbiting to slowest-orbiting from our vantage point on Earth): Moon, Mercury, Venus, Sun, Mars, Jupiter, Saturn. You’ll note that the days of the week actually follow this order for every other day, thus allowing the sequence to complete itself over a two-week period.

This is mostly due to the fact that each day is also divided up into planetary hours (which is a concept developed in Hellenistic astrology), and a fundamental premise of this system is that each day begins at sunrise with the planetary hour that corresponds to that day (so we know, without fail, that beginning at sunrise on Thursday, we get Jupiter’s hour). When you run the numbers, it works out in this order.

Also, no big deal or anything, but when you arrange the planets in Chaldean order and then draw a line connecting them in the order of the weekdays, you get this neat seven-pointed star, which appears to contain the secrets of the universe.

The Germanic peoples eventually added their own twist to this system by naming the days after their own deities, depending on which was the closest corollary to the Roman version. These versions are where we get a lot of the English weekday names from.

And just in case you thought these associations were limited to Western cultures, the Thai word for Friday, or Wan Suk (วันศุกร์), is associated with the Sanskrit word for Venus in Hindu astrology: Shukra.

Monday, or the Moon’s day, was originally named dies Lunae in Latin. From this, we got lunes in Spanish and lundi in French. The English “Monday” derives its name from “moon,” as well as the Norse moon god Máni. The Roman version of a moon deity was Diana, goddess of the hunt and childbirth.

Tuesday is devoted to Mars, referred to as dies Martis by the Romans. Hence martes in Spanish, mardi in French and martedi in Italian. The Norse god of war, who obviously fist-bumped Roman War God Mars, was named Tiw, hence the Old English word for Tuesday: Tīwesdæg.

Wednesday is Mercury’s day, named dies Mercurii in Latin. In Spanish, it’s called miércoles, mercredi in French, and mercoledì in Italian. “Wednesday” sounds nothing like “Mercury,” but that’s because the Old English word Wōdnesdæg was named after Odin (or Woden in English), a Norse god. Odin and Mercury are similar in the sense that they’re both shapeshifting gods (literally “mercurial”), associated with the dead in some form (Mercury was a psychopomp, or a guide of souls to the afterlife), and associated with writing.

Thursday is Jupiter’s day, known as dies Iovis in Latin (jueves in Spanish, jeudi in French, and so on). Jupiter and Thor were both lightning gods, which is probably why Thursday sounds so much like “Thor’s Day.” However, the Anglo-Saxon name for Thor was Thunor, which gave rise to the Old English word Thunresdæg.

Friday is a weekly Venus holiday, known as dies Veneris in Latin. This extrapolates to viernes in Spanish, vendredi in French and venerdì in Italian. The Norse goddess Frigg represents love and beauty — just like Venus. Hence the Old English word for Friday, which is Frīgedæg.

Saturday is, a little more obviously, Saturn’s day (or dies Saturni). In Spanish, it’s called sábado; in French, samedi (which are actually named for the Sabbath). Saturday is the only English weekday name that’s still clearly associated with a Roman god, which seems appropriate when you consider that Saturn is associated with longevity and permanence in astrology.

Sunday is the Sun’s day. Seems pretty simple, yeah? The Romans called it dies Solis, which is less obviously connected to the Spanish word domingo, or the Italian word domenica. This is actually a Christian reference to Jesus (literally “of the Lord”), which was instituted by Constantine when he converted to Christianity.