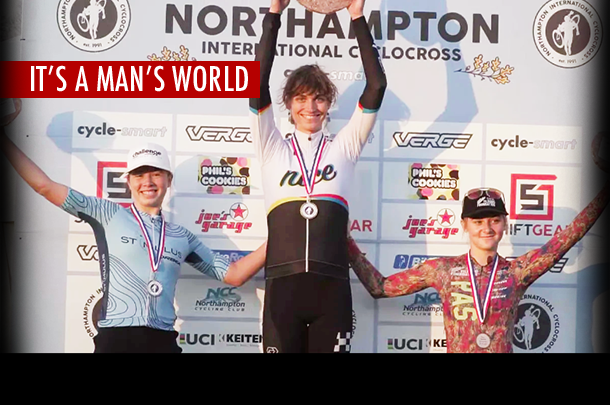 As the old patriarchal adage goes, “It’s a man’s world.” Indeed, the women at a recent cycling race in Massachusetts learned this the hard way, as a man who self-identified as a woman grabbed the top spot at a recent elite women’s division event.

However, critics are now pushing back hard against the madness, claiming that this a lack of fairness in women’s sports is threatening to destroy female competitive sports altogether. Once again, the top competitor in a woman’s sport has proved womanhood is optional. On Saturday, a biological male who reportedly only began “the physical process of gender transition” in 2019 placed first in a female category at the Union Cycliste Internationale’s (UCI) Verge Northampton International Cyclocross.

Cyclocross, according to USA Cycling, is a “cross between road cycling, mountain biking and steeplechase,” where participants use modified road bikes. Upper-body strength comes in handy, as cyclists are required in certain sections to dismount their bikes and carry them up stairs or steep inclines as well as jump with them over obstacles.

Austin Killips, 26, is a transsexual road racing cyclist who competes internationally against women for the U.S.

On day one of the UCI Elite Women race, Killips placed first with a time of 50 minutes and 25 seconds.

The first woman to complete the race was Canadian racer Ava Holmgren, who secured second place with a time of 50 minutes and 26 seconds. Lizzy Gunsalus came in third.

Killips proved wanting on day two of the race, coming third after Raylyn Nuss and Lizzy Gunsalus, who came in first and second respectively.

This is not Killips’ first time competing against women with the Rhode Island-based “nice bikes” team.

On Sept. 3, Killips placed first in the Northampton Cycling Club Hydra Cross Women Category 1/2/3 when competing in Holyoke, Massachusetts. In June, the cyclist placed 8th, getting beaten by 7 real women in the 2022 American National Championships.

Continue this story at The Blaze