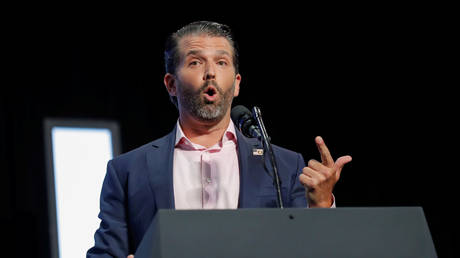 Donald Trump Jr. lashed out at US media, which failed to cover the latest development in the story of USPS worker Richard Hopkins. He was reported as having recanted his allegations of election fraud, but later denied this.

The president’s son accused the US media of using “Stalinist tactics” and trying to “railroad” Hopkins. “America better wake up to exactly what’s going on right now,” he tweeted.

🚨🚨🚨Oh my God investigators and the media are trying to railroad a whistleblower. America better wake up to exactly what’s going on right now. The Stalinist tactics should not fly here or anywhere else in the world. https://t.co/Rl3tCuUcMU

Hopkins became national news after claiming that he had overheard his boss, the postmaster in Erie, Pennsylvania discussing backdating ballots that arrived after election day. On Tuesday, the Washington Post reported that he admitted to making up the story when talking to federal investigators on Friday. Hopkins later said this was not true and called on the Post to retract their story.

Donald Trump claims the election was stolen from him thanks to widespread fraud and has refused to concede to Joe Biden, despite mounting pressure from the US establishment to do so. Hopkins’ claims were cited by Trump ally, Senator Lindsey Graham, when he called last week for a thorough investigation of all alleged voting irregularities.

Also on rt.com
RECANT your story, US postal worker tells Washington Post after report he backtracked on claims of election fraud

20 mins ago The Hill

20 mins ago The Hill