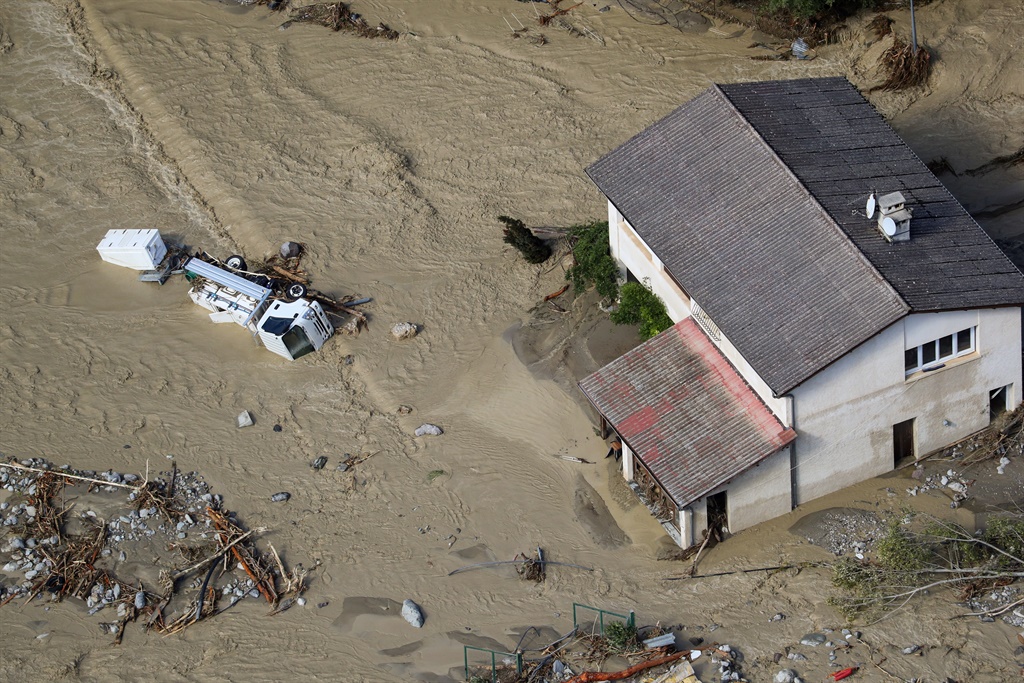 This aerial view taken on 3 October 2020 shows the damage in southeastern France, after heavy rains and floodings hit the region.

Two people died and authorities listed some 20 as missing on Saturday after heavy storms lashed southern France and northern Italy with hundreds of aid workers deployed to villages cut off by the deluge.

Regional authorities said 11 people were missing in the Piedmont region, where several villages were cut off after the downpour rendered roads impassable.

They said the situation was “extremely critical.”

Authorities in Venice expected the city – which also suffered violent storms in August – to be submerged by an ‘acqua alta’, an occasional tidal peak coming in from the Adriatic to reach the Venetian Lagoon and flood as far as the iconic Saint Mark’s Square.

But a complex network of 78 artificial dykes put up across the city kept the waters out.

The head of the Association of Saint Mark’s Traders hailed a “historic day.

“Normally we would have been up to our knees in water,” Claudio Vernier said.

The storms also affected the regions of Lombardy, Liguria, adjacent to areas of southeastern France where eight people were missing after the region around Nice suffered a sharp rise in water levels.

French Interior Minister Gerald Darmanin said a policeman earlier listed as missing in the village of Saint-Martin-Vesubie north of Nice and close to the Italian border had been found safe and well.

Local media showed how the rainfall had collapsed a main road around the village.

Darmanin was later due to visit the region accompanied by Prime Minister Jean Castex.

“The situation is catastrophic in some communes,” regional lawmaker Eric Ciotti told AFP as France’s meteorological office said up to 500 mm of rain had fallen in some areas.

On Friday, fierce winds were seen driving heavy rains across large swathes of France, knocking out electricity for tens of thousands of homes along the western Atlantic coast and causing destructive flooding in the southeast.

An autumn storm baptised Alex buffeted Brittany overnight, with wind gusts reaching 186 km/h at Belle-Ile-en-Mer, an island off the coast near Nantes.

Authorities in the southern Alpes-Maritimes region had been placed on alert on Friday and around 12 000 people in three valleys to the north of Nice were without power early Saturday afternoon.

“We are thunderstruck. We saw the (river) Vesubie burst its banks – everything was swept away, including part of the old iron bridge,” Serge Franco, an elderly resident of Roquebilliere in Nice’s hinterland, told AFP as rescue helicopters hovered overhead.

“My house is habitable but half of my land has been swept away,” said another resident, Guillaume Andre, who was evacuated overnight but returned to see the devastation after daybreak.

Did you know you can comment on this article? Subscribe to News24 and add your voice to the conversation.