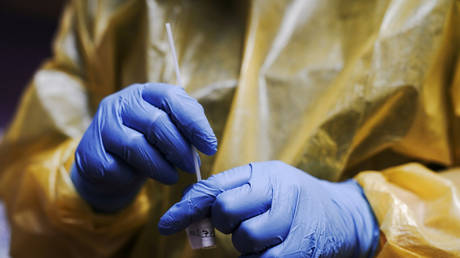 The US has again smashed its record for daily coronavirus infections, reporting just shy of 85,000 new patients over the last 24-hour period as much of the country sees a significant surge in cases.

The record-breaking single-day spike saw 84,218 new cases reported on Friday, according to data collected by Reuters, easily shattering the previous record of 77,299 infections tallied on July 16.

Though the US has also experienced a jump in hospitalizations in recent weeks – with increasing numbers reported across 39 states – it remains below the level reached in July, when more than 47,000 patients were hospitalized for Covid-19. Today, that number stands at 41,000, with some 800 coronavirus-related deaths per day, compared to July’s 1,200.

Also on rt.com
Scientists discover ‘grappling hook’ which makes coronavirus so much more infectious than its SARS predecessor

While it’s unclear what’s driving the spike, health experts have warned that colder temperatures could contribute to spreading the virus as it forces people into closer quarters indoors. Students returning to school may also play a role, as well as relaxed precautions as a result of fatigue with government-imposed restrictions.

To date, the US has confirmed a total of nearly 8.5 million coronavirus infections since the outbreak was first observed in Wuhan, China late last year, as well as more than 223,000 deaths, according to Johns Hopkins University. The virus has afflicted in excess of 42 million people worldwide, killing some 1.1 million.

Pelosi Gets Desperate, Points to Popular Vote As Dems RAGE About Their Election Failure

Pelosi Gets Desperate, Points to Popular Vote As Dems RAGE About Their Election Failure