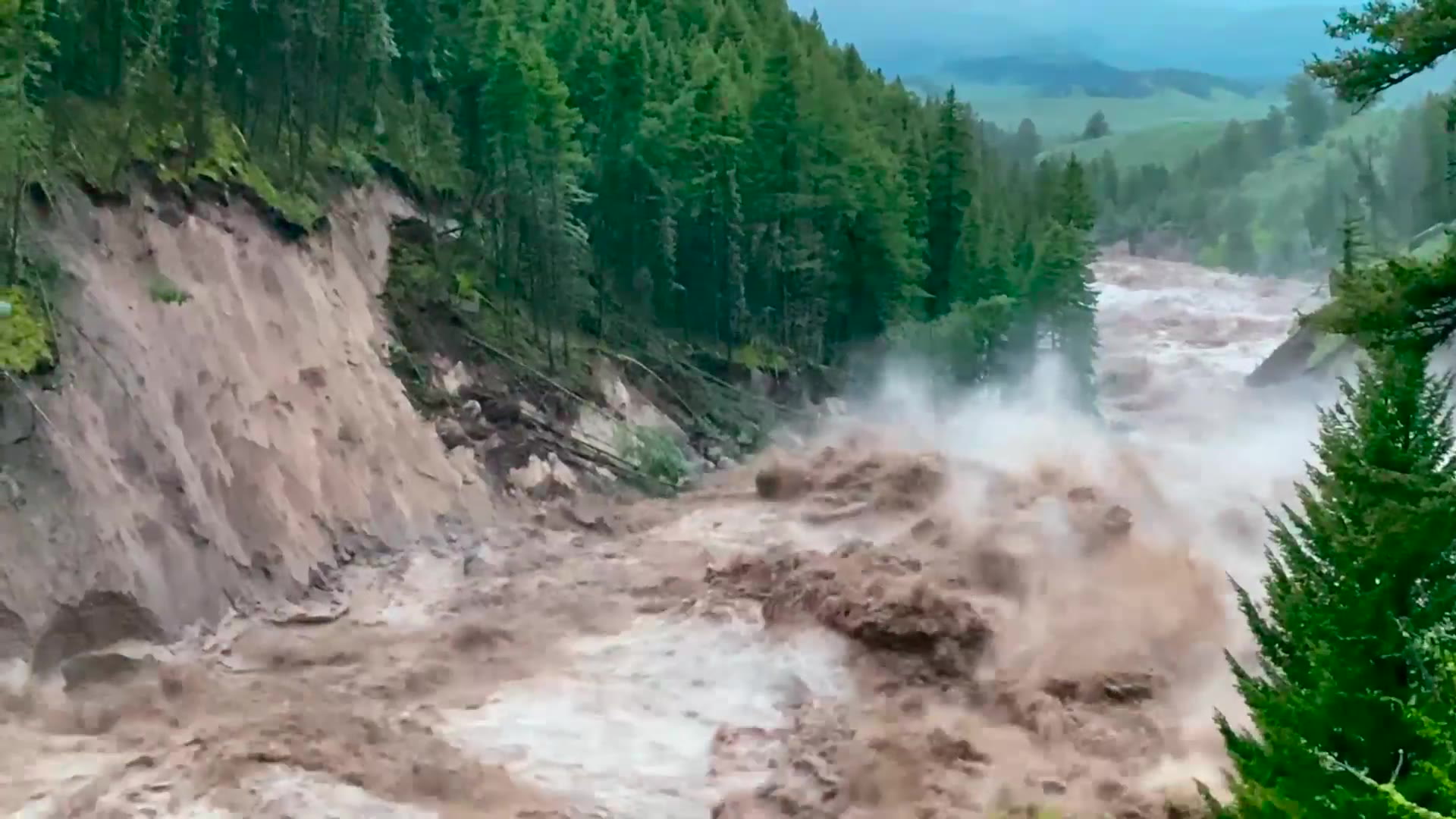 Water churns in an angry brown torrent, trees collapse as the banks underneath them vanish in the spray, and roads crumble, asphalt carried downriver as if it were driftwood.

A newly released video (opens in new tab) captures the destruction from the historic June 13 flood in Yellowstone National Park, as the raging torrent surged across the park. What once were placid mountain waterways are transformed into roaring cascades; sloping riverbanks become sheer cliffs, their sediment carried away by the rushing water.

The video, which was shared online by the National Park Service on July 18, also shows post-flood damage. The Canyon and North Entrance Road, which once hugged the Gardner River, now terminates abruptly in a ragged zig-zag, the river curving into the canyon walls that once supported the roadway. The spot where a patrol cabin once stood is inundated. Footbridges are washed out. Another video that was previously captured by a witness inside the park showed a park service staff housing building washing away. (opens in new tab)

The damage is the result of what the U.S. Geological Survey termed (opens in new tab) a “1 in 500-year event.” This means that, according to historical river gauge data on the Yellowstone River, there is a 0.2% chance of a flood that extreme each year. (Just because it’s a “1 in 500-year” flood doesn’t mean that a similar flood can’t happen in the next year, or the next — and changing climate can affect these probabilities so that similar extreme weather events become more common.)

At the time of the flood, the region around northern Yellowstone received a summer’s worth of precipitation in just three days, according to CNN (opens in new tab). This rain fell on mountains that hadn’t yet completely thawed, so winter snowmelt combined with the precipitation to create the record-breaking flood. According to the National Weather Service Billings (opens in new tab), between 0.8 inches to over 5 inches (2 to 12.7 centimeters) of rain fell, combining with between 2 to 5 inches (5 to 12.7 cm) of snowmelt in the Beartooth and Absaroka mountains of Montana and Wyoming.

The park closed in the days immediately after the deluge. Eighty-eight people had to be rescued by helicopter after being cut off from the rest of the park by washed-out roads, according to Fox Weather (opens in new tab).

Despite the massive damage, the south and north loops of the park reopened to the public within three weeks. Now, tourist attractions such as Old Faithful are accessible by car from the west, south, and east entrances of the park. The north and northeast entrances remain closed to vehicles, though portions are open to foot and bicycle traffic, according to the National Park Service. The NPS has not released a timeline for when repairs will be completed.

This is what DeepAI art generator came up with for "typical Reddit user". These things are getting good!