Was the Fight for Irish Independence Pointless? 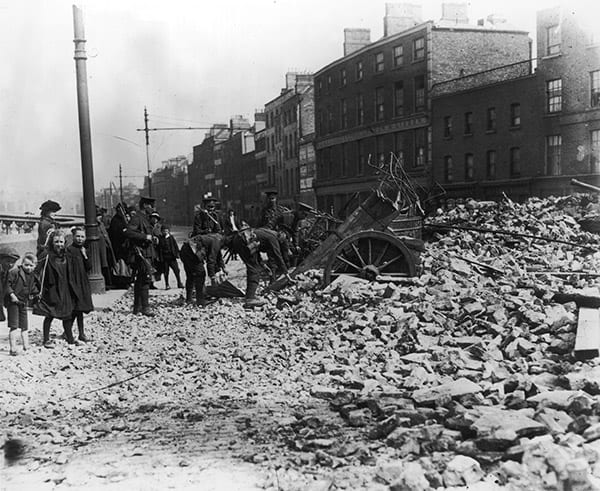 The Irish struggle for independence was not peaceful. It was also not fought to establish a proposition nation. Ireland was an ethnonationalist state born in blood. Some will say the revolution was monstrous, others that it was justified and heroic. All should agree, however, that if today’s Irish leaders give their country away to the Third World, it was ultimately pointless.

“Physical force republicanism” has a long tradition on the Emerald Isle. The 1916 Easter Rising was unpopular at the time, but soon achieved mythic status. Just six years later, Irish revolutionaries won the Irish Free State after a successful insurgency. The Free State, which was still nominally subject to the British Crown, still wasn’t good enough for some of the most dedicated activists, notably Eamon de Valera. A brutal civil war then erupted between those who supported and opposed the Irish Free State, leading to the assassination of Michael Collins, a revolutionary hero and chairman of the fledgling state’s Provisional Government. On both sides were hard men fanatically dedicated to a nationalist ideal. After the war, de Valera founded Fianna Fáil (“Warriors of Destiny”) and became Ireland’s dominant political leader. He defended Irish independence and neutrality for decades.

Civilian children watch soldiers amid the rubble and ruins of a Dublin street during the Easter uprising of 1916. (Credit Image: © Mary Evans via ZUMA Press)

Bobby Sands was a PIRA commander who martyred himself in a 1981 hunger strike. In his prison diary, he wrote that Ireland’s right to “sovereign independence” included the right to “armed revolution.”

“Foremost in my tortured mind is the thought that there can never be peace in Ireland until the foreign, oppressive British presence is removed,” he added, “leaving all the Irish people as a unit to control their own affairs and determine their own destinies as a sovereign people, free in mind and body, separate and distinct physically, culturally, and economically.” You can even buy a propaganda poster featuring this quote and the image of a masked guerrilla fighter holding an M-16, along with the word RESISTANCE emblazoned across it.

In Ireland today, questions about immigration are inseparable from Irish nationalism. The reason Northern Ireland is even an issue is because the British deliberately settled religiously and ethnically distinct pro-British colonists in the Irish resistance’s onetime center. The Plantation of Ulster was an intra-white “Great Replacement,” and it worked for centuries. It arguably still does, because it ensures British control of the north.

IRA terrorism against the British is remembered almost fondly in the United States. Slate reported in 2020 that memes and songs celebrating the IRA’s campaign had suddenly taken off on TikTok. “[S]ome might be relishing the idea of extreme and direct political action after being disillusioned by the failure of America’s two-party system to lead and take care of its citizens throughout the pandemic,” it wrote. Former Sinn Fein leader Gerry Adams, an alleged murderer, likewise enjoys a popular social media following, with respectful coverage from VICE, The Guardian, and the Irish Mirror. Mr. Adams most recently made headlines for saying he wouldn’t have stopped the 1996 IRA bombing attack on the London Docklands even if he had known about it in advance.

You can easily find songs about the Irish using surface-to-air missiles and Armalite rifles against the British. Popular streamer Hasan Piker can play “Come Out Ye Black and Tans” for a laugh. You can also find these songs on Spotify. Few are calling for censoring these relics of Irish history on the grounds that they could incite violence.

This reverence for propaganda about fighting the British from the not-so-distant past seems odd in the context of Ireland’s current immigration policies,. Since 1996, Ireland has been a country of net immigration. The Migration Policy Institute reports that this is due to economic growth that “created an unprecedented demand for labor across a wide range of sectors, including construction, financial, information technology, and health care.” The Financial Times reports that tech companies are promoting the same “diversity and inclusion” programs in Ireland that plague the United States. Ireland now has Black History Month and a Black Lives Matter movement.

In the short time since its independence, the Republic of Ireland was foolish enough to admit Afghans and other non-whites, thus giving the United Nations an opening to complain about “the lack of adequate redress for victims of racial discrimination and systemic racism in Irish childcare institutions between the 1940s and 1990s.” It wants “full reparation to the victims.” Ireland is now on the same road as the United States and other post-Western countries to a non-white majority. The Irish Times reported in 2005 that the president of Dublin City University expected that the “indigenous Irish will form a minority” in their country by 2050. However, he claims that immigration is still needed “if we are to remain prosperous.”

The prosperity argument isn’t compelling. Ireland went into a recession in 2008 and has arguably never recovered. The country faces a housing shortage. Despite this, the Irish government has reportedly allowed 20,000 non-Ukrainian asylum seekers into the country in 2022 alone, along with 50,000 Ukrainians. The government has moved migrants into unused buildings and schools without telling local residents. Despite protests, Integration Minister Joe O’Brien said that the “small but sinister element” won’t stop government policy. This may be just the beginning. Ireland’s minister for children, Roderic O’Gorman, says Ireland must now be ready to welcome refugees from “climate change.”

A nationalist movement is developing. The National Party, the Irish Freedom Party, and other groups are leading protests against refugee settlement, in such places as Ballymun and Drogheda. Breitbart reported that “the latter of these demonstrations were disrupted by leftist activists, who shouted ‘racist scum’ repeatedly while waving LGBT and transgender flags, for some reason.”

The Irish Mirror is worried about “a concerted attempt to demonise new arrivals,” something diversity in sports can supposedly combat. It quotes one soccer club chief operation officer, who thinks the Irish may be being manipulated by “the people who run various YouTube accounts,” and who have “the same rhetoric, the same disinformation.”

“Ireland has a moral and legal responsibility to provide shelter to those who come to our country fleeing war and prosecution,” said Ireland’s Department of Children, Equality, Disability Integration, and Youth. “The Department strongly condemns any attempt to promote division and hostility towards those who come here seeking safety.” Justice Minister Simon Harris denied that they were protests at all, calling them “intimidation.”

What the Justice Minister thinks could be very important, because the government is pushing new “hate speech legislation.” It’s intended to make it illegal to “communicate” or “behave” in such a way “that is likely to incite violence or hatred against a person or group of persons on account of their protected characteristics or any of those characteristics.” The definition of “likely” can only be subjective.

The government could also authorize police to search homes, looking for prohibited material. “We want perpetrators of this vile behavior to know they will be punished for spreading hate, prejudice, and division,” said then-Justice Minister Helen McEntee. “Hate offences law must be enacted as policy,” demanded Adam Long of the National LGBT Federation. He likewise dismissed concerns about free speech:

We will also hear claims that ‘free speech’ is supposedly being threatened, as if Ireland, in legislating against extreme criminal hate speech rather than the merely offensive . . . . Far from being anti-democratic, such provisions are in fact the hallmark of a civilised society.

This law won’t be the end, either. “Legislation is only one measure needed to tackle the harm caused by hate crime and extreme hate speech,” said the Coalition Against Hate Crime on its website. “Only certain narrowly defined behavior can be addressed with a criminal justice approach. That’s why government must commit to a comprehensive national action plan” [emphasis in original], whatever that may mean.

Media coverage of the protests against immigration has been overwhelmingly negative:

Fintan O’Toole: Far-right agitators must be cut off from local communities by facts https://t.co/sART3CM0jL via @IrishTimesOpEd

Yet, what is the point of having a nation if not to separate one’s own people from others? There are differences between groups and peoples, even closely-related ones. Irish history is proof enough. How is importing thousands of non-white people when resources are short going to make things better?

“National Party? National shame” is the title of an article from BelfastMedia with a straightforward message: nationalism is bad.

Is Ireland even a nation anymore? Ireland never had a colonial empire, and the Irish were even sometimes enslaved themselves, yet today’s Irish suffer from the same white guilt and xenophilia that plague formerly colonial and slaveowning nations. Ireland’s modern identity is derived from a national uprising against a multinational, cosmopolitan empire, but newly-independent Ireland very quickly traded its sovereignty for the lure of the global economy and the supposed need for mass immigration and cheap labor. Members of various Irish political parties, including Fianna Fáil and Sinn Féin (the latter name of which means “We Ourselves” or “Ourselves Alone”), signed a statement opposing the “protests” (the scare quotes are their own) and worrying about the community’s “reputation.” Reputation? Among whom? In this context, what is the point of bragging about the IRA’s exploits or mocking the British monarchy? The Irish people’s main opponents today are not in London or Belfast, but Dublin and Brussels. It’s far easier to brag about one’s supposed willingness to fight the British than to admit that the Irish are being displaced by immigrants imported by their own government. If the Irish are not to be a people “separate and distinct physically, culturally, and economically” but simply individualistic consumers in a multicultural and multiracial society, the sacrifices of Irish patriots were in vain.

Let us hope that today’s Irish nationalists will be able to secure their people’s future. If they can’t, the least the island’s so-called leaders could do is stop pretending they represent the Irish people’s interests and scrap their nationalist trappings. Let them admit that their idea of Irishness goes no deeper than a corporate logo and a rainbow flag.