Why are some Ukrainian refugees being denied Medicare?

Unlike other refugees, such as recent humanitarian arrivals from Afghanistan, many are facing a hefty bill for basic medical care.

Since the Russian invasion in February, approximately one third of Ukrainians have been forced to flee their homes, nine million of whom have had to leave the country altogether.

In response to the crisis, Australia granted 9000 Temporary Humanitarian Stay (subclass 449) visas to Ukrainian nationals, with around half arriving in the country before the offer expired on 31 July.

However, unlike 449 visas offered to other refugees, such as those who fled Afghanistan in response to the Taliban assuming control of the country, the ones offered to Ukrainians do not provide Medicare access.

Dr Rachel Claydon, Chair of the Clinical Advisory Group at Refugee Health Network Queensland, told newsGP this has been particularly challenging for many Ukrainian refugees.

‘Medicare access and GP availability have been the two biggest issues … working with Ukraine arrivals,’ she said.

‘Initially, we had to ask GPs to see patients pro-bono while they waited for a [more permanent] 786 visa, but now the Ukrainian community of Queensland have been paying for consults, which is not viable in the long term.

‘It is very difficult to navigate this in a space where many general practices have closed their books and are already reluctant to take on new and complex patients.’

Subclass 449 visa holders are not eligible to access Medicare unless there is a Ministerial Order signed by the Federal Minister for Health, who is advised on such matters by the Department of Home Affairs.

A Home Affairs spokesperson did not answer questions asking why Ukrainian refugees have been excluded from Medicare, but said the ‘vast majority’ have been approved for Temporary Humanitarian Concern (subclass 786) visas.

These visas are valid for three years and do provide access to Medicare, but also require individual health checks, which have been outsourced to the multinational health insurance company Bupa and can cost up to $345.10 per person.

It has been previously reported that Afghan refugees also had this requirement waived, but Home Affairs did not confirm whether this is the case when asked by newsGP. It also did not say whether applicants waiting for their subclass 786 visas to be assessed could access Medicare.

Dr Joanne Gardiner runs a GP clinic for refugees and asylum seekers at the Royal Melbourne Hospital and is a Fellow at the state-based Refugee Health Fellow Program.

She has worked with migrant and refugee women for most of her nearly 30-year career and told newsGP that her experience with Ukrainian refugees has been unique.

‘One of the things that has really surprised all of us in this area is the lack of access to Medicare for Ukrainian refugees, and the convoluted procedures that people have to go through,’ Dr Gardiner said.

‘Because many of us are also involved in caring for Afghan refugees we were very delighted that they were given access to Medicare and Centrelink … but it’s quite a different kettle of fish for Ukrainian people, even though we are just as shocked and horrified for the Ukrainian populace as we are for the Afghani populace.’ 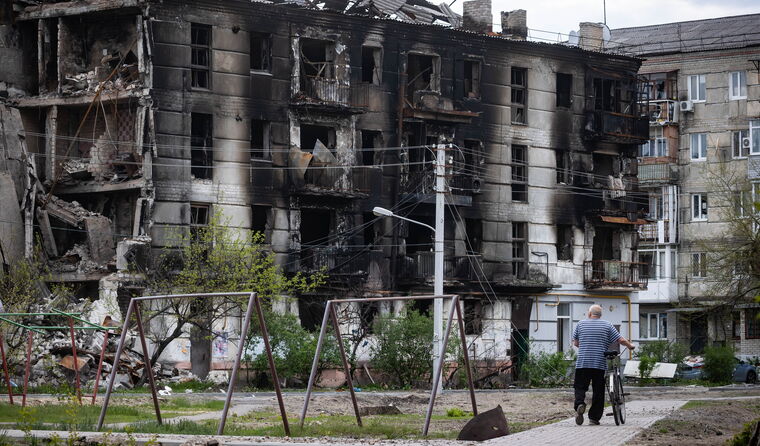 Approximately one third of Ukrainians have been forced to flee their homes dur to the Russian invasion. (Image: AAP)

With the lack of access to Medicare impacting Ukrainian refugees, Dr Gardiner wants the Federal Government to assess and make the necessary adjustments so it can be offered.

She highlights that while some state government health services offer support to Ukrainian refugees through free access to emergency care and doctors employed by organisations to deliver pro-bono medical care, it is ‘not terribly satisfactory’ to manage health this way.

‘Of course there are also the wonderful Ukrainian GPs in the community who are supporting fellow countrymen and women with pro-bono care,’ Dr Gardiner said.

‘But this really can’t go on indefinitely, people can’t offer pro-bono medical care for this cohort … which will continue to grow.

‘Even if Medicare access is granted … the process is by no means quick or smooth.

‘The war is showing no signs of stopping, so this [delay] is concerning.’

Offering trauma-informed care to patients from refugee and asylum seeker backgrounds is critical, according to Dr Gardiner, who regularly uses the Australian PTSD guidelines and the Australian Refugee Health Practice Guide.

But even though trauma-informed care is available through various state-based programs and torture reform services, she says the lack of Medicare access is a barrier to providing this type of care effectively.

‘One of the foundations for enabling people to recover from war-related trauma, trauma of any kind, is safety,’ Dr Gardiner said.

‘Safety is the bedrock of what [Ukrainian] people need now. Difficulty accessing quality, continuous medical care, or confusion about how to access medical care, investigations, medication – that really erodes the safety people might feel from being in Australia.

‘That’s one of the reasons why access to Medicare is a very serious omission for this population.’

Another issue that Medicare ineligibility presents is the impact on people with complex medical care, who may require ongoing medication.

‘We’re getting older [Ukrainian] men and women, as well as children … and this is going to be very challenging for those with complex conditions,’ Dr Gardiner said.

‘Obviously, the men who are of fighting age are being kept back in the country, but some of the people that are coming to Australia will tend to be older and have chronic health conditions or pre-established health conditions that will need investigation.’

Dr Gardiner said it is worth noting that people can be offered a refugee health assessment under Medicare items 701, 703, 705 and 707, but recommends that GPs wait until their Medicare card has arrived, if they are eligible.

‘In the meantime, focus on the immediate standard health condition of these patients, such as immunisations,’ she said.

‘Because [Ukrainian people] have basically come from a situation where they had a well-functioning country with good healthcare, they have fewer untreated health conditions than we’ve seen in other refugee cohorts.’

State and territory information for health professionals providing care to the Ukrainian community:

newsGP weekly poll
What is your main source of income outside of Medicare and private billing?