Why Did Eisenhower Fail in 1961? — Strategic Culture 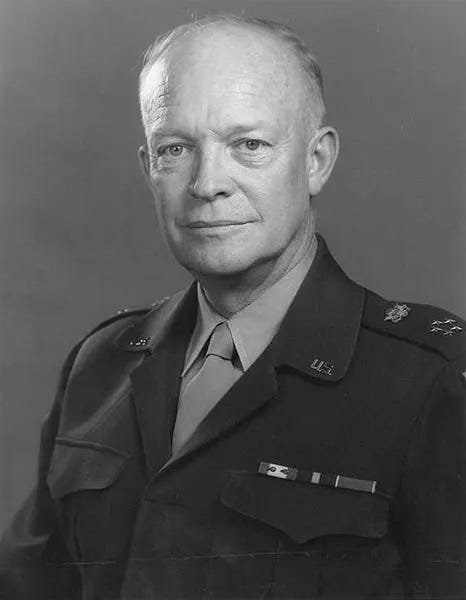 Perhaps America, Home of the Brave, Simply Fears Too Much

In 1961, in his famous farewell address, President Dwight D. Eisenhower warned America about the military-industrial complex. He said it potentially posed a grave threat to liberty and democracy, noting that only an alert and knowledgable citizenry could keep its “disastrous rise” in check. In an earlier draft of his speech, Ike had included Congress as part of the complex, but he removed it from the final draft in the interest of parting with Congress on good terms.

Ike, of course, knew the military and loved it and had worked with industry as well. He knew of what he spoke. Every year when he was president, the military wanted more. So did the weapons manufacturers. And Congress was willing to give them more in the name of jobs and for that nebulous cause of national security. Ike did a decent job as president containing the ambitions of the military and the greed of America’s merchants of death. His speech in 1961 was his parting shot across the bow of the complex and a warning that’s largely been forgotten by Americans then and now.

Ike, I think, would be dismayed but not shocked at how the military-industrial complex or MIC has expanded its “misplaced” power over the last sixty years. The MIC is now the MICIMATT, or the military industrial congressional intelligence media academia think tank complex, employing millions of Americans in pursuit of full-spectrum dominance across the globe. In fact, America has proudly become a warrior nation (the citizen-soldier ideal is long dead) with 750 bases around the world and military budgets that routinely touch or exceed a trillion dollars. Permanent war is the new normal in America, justified as always in terms of making the world safe for democracy.

In the spirit of Ike, we should recognize the military or industry or Congress alone is not the enemy. It’s the conjunction of an immense military establishment with powerful industrial interests, and the enabling of the same by Congress, that needs to be addressed and reformed.

Yet, given its enormity and its power, the complex is remarkably resistant to change, let alone to being shrunk and weakened. It will take enormous national will, working against powerful propaganda forces that will paint every Pentagon budget reduction, large or small, as unsafe if not un-American.

So why did Ike fail?  Or why did we fail Ike?  He warned us in 1961.  Why have we as “an alert and knowledgable citizenry” failed to guard against the acquisition of “disastrous” power by the MIC?

For the truth is America has become an Orwellian country where war is peace.  War (or preparations for war) has been continuous since Ike’s speech.  Our government wages war in the alleged cause of peace.  It acts imperially in the name of democracy, and we collectively accept or tolerate the tale that Big Brother tells us.

Short of a revolution, what America needs is radical honesty. An awakening.  If we truly want as a people to pursue peace, we can’t do that by constantly waging war.  If we truly favor democracy, we can’t pursue one through militarism and imperialism.

What kind of nation — what kind of people — do we want to be? Judging by our federal discretionary budget and by the general affection for all things military in our nation, perhaps we want to be a bellicose empire. I’m not saying all Americans want this; even those who do probably wouldn’t state it so baldly. But maybe this is just who we are, a nation and a people convinced that it’s always at risk, and thus one that’s forever fearful, hyper-vigilant, coiled to strike and ready to rumble.

“Quite an experience to live in fear, isn’t it? That’s what it is to be a slave.” So says Roy Batty, the doomed replicant in Blade Runner, played so brilliantly by Rutger Hauer. There’s a lesson here for all of us. The first step to heeding Ike’s warning, as well as his marching orders to us, is to control our collective fear. To stop listening to threat inflation about China or Russia or Iran or terrorism or whatever. Fear is the mind-killer, Frank Herbert noted in Dune, thus to think freely requires us to master that which kills thought. Fear, Master Po said in Kung Fu, is the only darkness.

We will only begin to downsize the military-industrial complex and end our pursuit of militarism when we acknowledge our fear, stop being slaves to it, and head away from the darkness.

America is the home of the brave, so we say. Isn’t it time we acted like it?