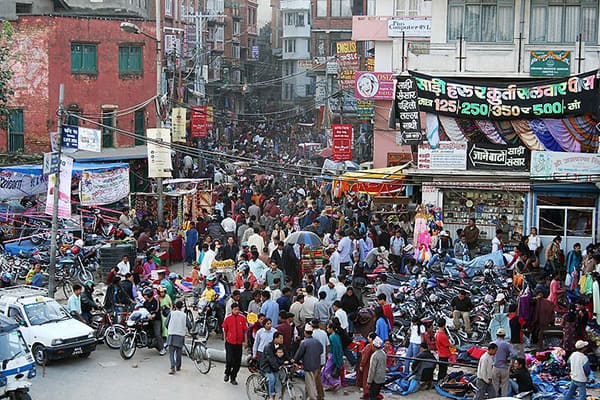 In less than a week, there will be eight billion people on Earth. United Nations Population Fund chief Natalie Kanem is cheerful about it: “Eight billion people, it is a momentous milestone for humanity. Yet, I realize this moment might not be celebrated by all. Some express concerns that our world is overpopulated. I am here to say clearly that the sheer number of human lives is not a cause for fear.”

On November 15, the United Nations will mark the “Day of Eight Billion,” which it says “is both a cause for celebration and a clarion call for humanity to find solutions to the challenges we face.” However, whites who read the organization’s proposed “solutions” should be worried. The UN complains about “inequality” notably “unequal access to health care, opportunities and resources, and unequal burdens of violence, conflict, poverty and ill health.” The UN has the solution: “We need to systematically remove the barriers — based on gender, race, disability, sexual orientation, or migration status — that prevent people from accessing the services and opportunities they need to thrive.” Removing “the barriers based on migration status” means “Let ‘em all in.”

We’re clearly in the UN’s sights:

We need to rethink models of economic growth and development that have led to overconsumption and fueled violence, exploitation, environmental degradation and climate change, and we need to ensure that the poorest countries — which did not create these problems, yet bear the brunt of their impacts — have the resources to build the resilience and well-being of their growing populations.

“Overconsumption” is a loaded term; who decides how much is too much? And “we” are supposed to “have the resources” for poor nations’ “growing populations.” You can guess who is supposed to pay.

Are there too many people? “Many experts say this is the wrong question,” said a story about population growth. One “expert” is Joel Cohen of the Rockefeller University. “Too many for whom, too many for what?” he asked. He also said humans are “stupid,” “greedy,” and don’t have “foresight.” If humans are stupid, greedy, and short-sighted, why have billions more of them?

Another “expert,” Jennifer Sciubba of the Wilson Center, said “it’s lazy and damaging to keep going back to overpopulation.” “Really, it’s us,” she explained. “It’s me and you, the air conditioning I enjoy, the pool I have outside, and the meat I eat at night that causes so much more damage.”

Clearly if we just give up air conditioning, pools, and meat, all will be well, but why should we go along with demographic blackmail? It’s not “lazy and damaging” for those in developed countries to say it’s a bad thing for poor countries’ populations to keep growing if we are going to have to sacrifice for them. But what fun it will be for the “experts” who will get to decide who uses too many resources, who should get more, and what we should be forced to give up.

More arresting is that the white population is shrinking not only in relative but in real terms. Two hundred million white people, one in every six on earth — a number equal to the entire population of France, Britain, Holland and Germany — will vanish by 2060.

The Caucasian race is going the way of the Mohicans.

Unlike the Mohicans, we will not get a reservation or a casino. The Guardian, in a 2000 article called “The last days of a white world,” wrote:

The global centre of gravity is changing. In 1900 Europe had a quarter of the world’s population, and three times that of Africa; by 2050 Europe is predicted to have just 7 per cent of the world population, and a third that of Africa. The ageing and declining populations of predominantly white nations have prompted forecasts of — and calls for — more immigration from the young and growing populations of developing nations to make up the shortfall.

The population shortfalls in Europe are mostly because whites are not having enough children. However, natalist policies intended to increase birth rates are controversial. For example, Swedish minister Annika Strandhall said of Hungary’s pro-baby polices, “This policy reeks of the 30s and as right-wing populists, they need to create smoke-screens for what this kind of politics does to the independence that women have been fighting for.” It’s clearly fascist to want your people to survive.

As the UN celebrates the “Day of 8 Billion,” it alludes often to abortion. Why not encourage it in poor countries? Of the world’s eight billion, half live in just seven countries, including the United States. However, this can’t be called a white country anymore. The white population is actually decreasing, something leftists openly celebrate.

China has the world’s largest population, but it faces a demographic crisis. Thanks to the “one-child” policy, by the end of the century, the Chinese population of 1.4 billion will fall below 800 million. Chinese will be old, and young people will struggle to support them. China’s birth rate has fallen throughout Xi Jinping’s rule, and China has the highest abortion rate among big countries.

Real population growth over the next century will come from Africa. Bill Gates said in 2019 that “by the end of the century, almost half the young people in the world will be in sub-Saharan Africa.” According to a 2017 Pew poll, millions of Africans — majorities in some countries — want to emigrate. Pew reported in 2019 that 45 percent of the people of Nigeria, the most populous African country, plan to emigrate within the next five years. That will be a lot of people. Nigeria could become the second most populous country in the world by 2100. If we take the UN at its word, there must be no “barriers” to stop Nigerians getting the “services and opportunities” they want.

In fact, it’s our fault they want to leave. At a Climate Change conference in Egypt, Bahamas Prime Minister Philip Davis said that unless rich nations cut down on climate emissions, there will be millions of “climate refugees.” Barbados Prime Minister Mia Mottley said there are already 21 million “climate refugees” and there will be one billion by 2050. She wants a tax on fossil fuel companies and more of our money. Does anyone think mass immigration would stop if we had zero-carbon economies?

“Climate refugees” are part of the new racket. Since, the north is responsible for most carbon emissions, bad weather in the south is our fault. Thus, the solution is “climate reparations.” Don’t look for the European Commission to fight this. European Commission President Ursula von der Leyen said she was “happy” it was on the agenda. “Now it’s important to sit down and really to define and sort out what it is, and then to look at the funding which is available,” she said. With Europe in an energy crisis, a probable recession, and paying for Ukraine’s defense, what “funding” is available? The United States won’t be excluded from such a scheme. We have emitted the most carbon so we are the most “responsible.”

Rich countries may emit more carbon than poor ones, but that means anyone who moves to a rich country adds to emissions. Gary Bauer wrote in 2010:

When people move from poor countries to America, they quickly adapt in at least one way — their consumption habits. Studies show that recent immigrants’ consumption patterns, including energy use, quickly resemble those of native-born Americans.

But it is important to compare immigrants’ CO2 emissions not with those of native-born Americans but with compatriots who stay home.

U.S. immigrants produce an estimated 637 million metric tons of CO2 emissions annually. That’s 482 million tons more than they would have produced had they remained in their home countries.

Of course, they come because they want to consume more, and don’t think twice about carbon. It’s hard to believe that anyone who wants to let in poor immigrants is serious about cutting carbon emissions.

Do climate activists believe what they are saying? They talk about the end of the world. Consider Just Stop Oil in Britain. One young white activist said she had “no future,” and blasted young people who weren’t doing “their duty” to stop fossil fuels. Members of Just Stop Oil attacked works of art because ending the use of fossil fuels is “the very first step to ensuring our survival.” Activists stopped traffic on the M25 road for four straight days.

The group calls the failure to stop fossil fuels “treason.” It claims “climate change and poverty are inextricably linked, with poor people and people of colour likely to suffer disproportionately from climate impacts.” The source is an NBC news story that says black neighborhoods will suffer most because climate change will increase flooding. The group worries about its “brothers and sisters in the global south.”

Here, we have young white activists screaming about dire threats to their survival, including, “in the extreme, human extinction.” They and other environmentalists seem unaware of threats to their racial extinction or to the connection between mass immigration and environmental destruction. If Westerners are forced to give up air conditioning, meat, or cars, why not stop migrants who came here because they want those very things? Would these extreme environmentalists be as ready to tell blacks to stay home as they are to deface a Van Gogh painting?

“Climate change,” like “racism,” can justify intervention into almost anything. Just as the Civil Rights Act makes any private black-white dispute a potential federal case, the “climate emergency” justifies sweeping intrusions into our lives. Also, climate activists combine their militancy with a deep grievance against the West that built the modern world. “Climate reparations,” “climate refugees,” and “climate justice” are new excuses to give our wealth to people who can’t support themselves. If environmentalists don’t combine their calls for sacrifice with a call to stopping immigration, it’s just another anti-white protest. People who worry about the environment should support “progressive” campaigns for birth control and what activists call “women’s rights.”

The white race, a global minority, is becoming a minority even in its homelands. That is the real existential problem young activists should fight. The solution is not meaningless pageantry about fighting climate change. It’s for whites to build a state that will allow us to escape the endlessly growing, gaping maw of non-white dependence. If whites aren’t around to save the planet, no one else will.