As the western propaganda facade begins to crumble around NATO’s latest nation-building project in Ukraine, its beleaguered leader, a former TV comedian, Vladimir Zelensky, seems to be running out of emotive virtue-signaling gimmicks for the western political and media machines to feed off of.

That said, this latest gag really takes the biscuit, with Zelensky claiming to have sanitized all ‘Russian influence’ in Ukraine, and therefore cleansed the country of its notorious reputation for institutional corruption and graft, before proudly declaring Ukraine to be ‘corruption free’ and totally ‘safe for direct foreign investment. 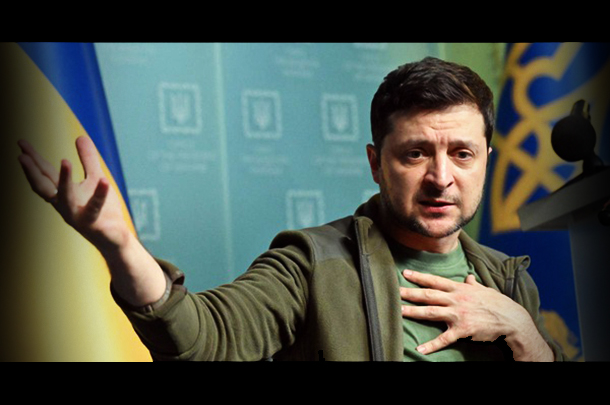 Corruption is a thing of the past in Ukraine and all Russian influences have left or been chased out, President Vladimir Zelensky told a global audience at the Bloomberg New Economy Forum on Thursday.

He provided no evidence to support his assertions. Only last year, Transparency International’s Corruption Perceptions Index ranked the country the second-most corrupt in Europe.

“No one will be able to forgive corruption in the future Ukraine,” he said, explaining that all the corrupt officials had fled the country in the months following the launch of Russia’s military operation. The remaining officials would not be tempted to “interfere in business operations” because all government services had gone electronic, he added.

Zelensky promised there would be “no influence of Russian capital in Ukraine” going forward, explaining that any business interests not “united” behind his government had either “left our enterprises, or we pushed them out” – including the many political parties and media outlets his government has banned, such as the Party of Regions of predecessor Viktor Yanukovych. The Ukrainian leader revealed he had just met with the vice president of the World Bank in order to “start a ‘pilot’ with them regarding investment insurance in Ukraine” and sought to allay potential concerns about corruption in his country. Investments – particularly by the mining and processing industries – would be safe, he insisted, praising the “independence of the economy, finances, and transparency of investments.”

Western media outlets like The Guardian ranked Ukraine at or near the top on lists of the most corrupt nations in the world prior to the start of Russia’s military initiative in the country in February.  Even Zelensky, in his inauguration speech, joked that 28 years of Ukrainian politicians had created a country of opportunities – “opportunities to steal, bribe and loot.”

However, many of those voices have since gone quiet for fear of being seen as perpetuating a pro-Russian narrative.

In June, the heads of the European Council and European Commission informed members of Zelensky’s government that they would have to “do their homework” to join the EU, tasking them with implementing judicial reforms, “de-oligarchizing” the economy, and fighting corruption successfully. The Council of Europe last month promised to help Kiev along by finding experts to advise it on constitutional reforms and electoral law to help the process along.